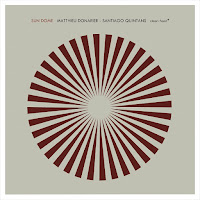 Sometimes an album comes along that takes you completely by surprise, as with this one from Matthieu Donarier (tenor saxophone & clarinet) and Santiago Quintans (electric guitar). Having not heard any of either musicians’ music before, Sun Dome came as a refreshing and fascinating listen.

In some respects it reminds me of the Fred Frith and Darren Johnston Everybody’s Somebody’s Nobody that came out last year, and not just because that was also a set of duets consisting of a guitar/wind instrument relationship. It’s more to do with the communicative nature of the music, either through the interplay of musical gestures or through the empathic blending of sounds, which is what Donarier/Santiago do particularly well throughout this set of fourteen pieces. The majority of the tracks are improvisations, but there are also tracks that have been composed by either musician. Due to the playful nature of the pieces, especially the composed pieces (which I suspect have an element of improvisation at their core) they also remind me of some of John Stevens Search and Reflect pieces, which also have a simple but effective structural principle that sets the music in motion in a particular way. Examples of this include the track ‘Itch’, which could be a sister piece to Stevens’ ‘Scribbling’, and the long drawn out tones of the title track and ‘Lucid Red’ being reminiscent of a piece like ‘Sustain’. However, these pieces are not academic exercises and both Donarier and Quintans bring their musicianship and creativity to the music. The tracks are generally short, sharp and concise, not outstaying their welcome with most coming in around the three to four minute mark. There is no extraneous playing on this album and every note feels that it has been carefully placed and thoughtfully determined.

Other tracks worthy of a mention are ‘Warm Fog’ an improvisation working with eerie, glassy tones that in a programmatic way captures the essence of the title. ‘A Line’ starting with a unison melody before both instruments gradually embellish the line by circumscribing and moving around the idea of the initial statement then coming together again at the end. Also the joyful delight of the bouncy and hocketing rhythms of ‘Puzzle’ and the consistent execution of them by both performers.

What we have in Sun Dome is a set of extremely well worked pieces that form an interesting and exceptional album. It is also a ‘real duo’ album with neither musician dominating over the course of the set and the balance of musical hierarchy being kept tastefully within check.
Paul on Monday, November 27, 2017
Share