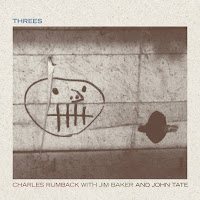 There are no drum solos on Charles Rumback’s latest album as a leader. No, Rumback isn't that kind of drummer, and Threes isn't that kind of album. This probably shouldn't come as a surprise to anyone who’s been following the Chicago scene fixture’s recent work under his own name. Of course it's not that Rumback isn't up to the task of showing off chops, but as both drummer and composer, his sensibility is marked by taste and restraint. He plays, as drummer and educator John Riley might say, with a fair amount of “headroom” or excess capacity—at any given moment he's playing what's best for that moment, even if it's only a fraction of his technical capability. Listeners with sharp ears—and drummers, certainly—will not only sense the depths that underlie the surface of his playing but will also understand that suggestion, in Rumback’s hands, has more power than demonstration could.

This approach affords the music on Threes a wonderful elasticity, and Rumback is lucky—or wise—to have built relationships with musicians like pianist Jim Baker and bassist John Tate who can adapt so well to this mode of playing. Together, the trio is a loose-limbed unit, relaxed and mellow, graceful and nimble. But elasticity isn’t synonymous with freedom. Indeed, while the set isn’t completely without “free jazz” moments—see the first half of the centerpiece suite “Three Storey Birdhouse/Right Reasons”—it won’t rank among the most adventurous shows that Constellation, the great Chicago venue where the album was recorded live, has seen. Rather, it’s against stated or implied reference points that the group thrives. Elastics only work, after all, if they snap back toward the center.

On opener “Salt Lines,” for example—a smokey, limber 3/4 swing—listen to how the trio toys with the pulse, Rumback stretching metrical subdivisions across the kit, Tate departing from quarter notes to add melodic touches, Baker unfolding the simple melody just behind the beat. The effect is thrown into relief when Baker sets off on his solo, busy but delicate against the roiling rhythm section, with just enough sour notes thrown in to maintain the right balance of flavors. This kind of roomy interplay is possible only because these three musicians have a deep knowledge of how to play together—and of what they’re playing (or playing with).

Consider that before its appearance here as part of a 20-minute suite, “Right Reasons” appeared in both a bass/drums duo version on Daylight Savings (with Tate) and a quintet version on In the New Year (Tate was there, too), and you start to grasp Rumback’s flexible relationship to his material. Like wearing in a new pair of shoes, putting compositions through these kinds of push-pull paces can make them comfortable enough that at a certain point you can all but forget they’re there, freeing you up to think more about where you’re going than how you’re getting there. If I suggest that playing someone else’s compositions might be the shortcut version of this idea, it’s only to illustrate my point; the group’s version of Andrew Hill’s “Erato” is anything but superficial. Like the album as a whole, it shows the trio inheriting tradition and making it their own. It’s a form of mastery, of course—but a mastery, perhaps paradoxically, entirely in service of the music.