577 Records has released a set of recordings from a Carter/Jennison/Parker/Ughi 2015 North American tour in a three volume edition. The extremely limited discs are available separately or together directly from the label. Downloads are also available from Bandcamp.

Also of interest: This year's installment of 577's Forward Festival is on Dec. 7th & 8th. For details, see http://www.577records.com/forwardfestival/ 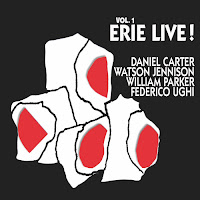 Daniel Carter (reeds) is a player whose whole demeanor shouts Openness. In his longtime duo with Federico Ughi (drums) – or in the monster trio with Ughi & William Parker (bass) – Carter is the shaman, acting as a conduit between the natural and spiritual realms. The Ughi duo can become a bit unhinged at times, veering wildly into space as a result of a perceived inability to control the unseen forces it summons. This is not in any way undesirable, of course – but with Parker involved, the music becomes more grounded. If Carter is the shaman, Parker is the wise Master whose experience with otherworldly spirits tames the unpredictable wildness – and allows for a more solid union with the material world. My confession is that this is my introduction to pianist (and multiple instrumentalist) Watson Jennison, and my first impression isn't great, as he rains down clusters on the top of the group & manages to almost drown out Carter on “Before Six.” No real worries, however, as balance is achieved by the end of the second track, “West,” with Ughi pounding prairie rhythms that accompany a moonlit ghost dance over wooden flutes.

Sunrise at “Square One.”
The ghost dance has gone on
all night.
Parker squeezes out
tuba farts as a New Orleans
rhythm from Ughi
inspires Carter to ride hard.
There is etouffee for breakfast as
Jennison lightly tickles the keys.
OK, Jennison is cool.

Parker & Ughi form a solid alliance on “Smoke” but the piece comes to an abrupt ending – an edit that is obvious.

Fifteen minutes of Opus performance closes the set. Ughi and Carter lock in and propel the beast upward. And outward. Jennison hides for awhile until the group coaxes him into soloing. Carter and Jennison fill out the space up top with a friendly battle – and the whole group slows the music to a magnificent ending. 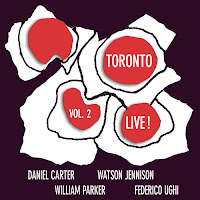 “Wondering” opens with an unusual lineup for the quartet: Carter on trumpet, Jennison on flute, Parker on tuba (and, of course, Ughi on drums). The music settles into a solid New Orleans shuffle after one mere minute. Carter's trumpet lines are solid melodic bleat fragments – and the whole groove becomes circular. The music fades out at the end. Parker and Ughi drive the funk groove of “Telephone Choice” on bass & drums, while Jennison's piano touches bring enough color to the proceedings that the music begins to glow from the inside. Another fade-out happens at the end of this track.

Parker and Ughi remain on their main instruments on “No Need,” but Carter switches to piano while Jennison continues to splatter paint on the overall sound via spatial marimba mallet drops. Parker opens the track with melancholic arco strokes. Beautiful autumnal melodic phrases from Carter dance across the top. A gorgeous mood piece.

This disc is the most eclectic of the bunch; but the successes found on this particular recording are the gems of the entire series. It clocks in at under 25 minutes but costs the same as the others. I say Quality Over Quantity. Dear consumer, if you can only spring for one of these discs, this is the one to get. 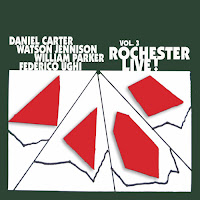 Carter's trumpet bleats ride on top of rolling waves of groove and sound as Jennison's piano / action / paints around them. Great as this is, the rapport between Ughi and Parker continues to be the main source of fascination to my ears. The forward propulsion is constant as they push the music onward, never in the slightest disagreement about where Forward is located. But when Parker switches to tuba on “You Think So?” he leaves Ughi to drive alone, preferring to punctuate the rhythm with bleats and blasts. Carter ceases on the opening and locks down with Ughi, the music intensifying right up to the end, which comes too soon (in the form of another fade-out).

A strange forced intensity prevails throughout the first half of “I Told” but things pick up more naturally once Parker puts down his horn and starts pumping the bass. “Casamef” fades IN as a chaos track that moves into a free, slow groove. “Noodles” features great interplay from Parker, Carter and Ughi while Jennison offers up counterpoint like it's his duty to do so. It's aggressive almost to the point of parody, but stay with it. It leads to the Cecil-like clusters of the intense “Always Nice,” featuring Parker on tuba (again). A strong ending to one weirdass ride.