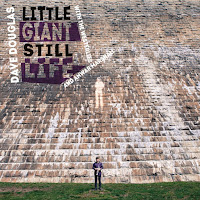 Everyone knows Dave Douglas, right? The prolific trumpeter was a member of the original Masada in the early 1990s and has amassed an astounding and diverse discography over the years. One of his latest is the brass heavy Little Giant Still Life. His partners on the recording are the The Westerlies, whom we last encountered when they were playing the work of a different (ex)Downtown NYC composer, Wayne Horvitz. Here they lend their voices and talents, along with drummer Anwar Marshall, to a set of new brash and colorful Douglas penned compositions.

What is so striking about Douglas' work - whether it is with this brass quartet, his electronic leaning group High Risk, or in the tribute work with his group Riverside which recently released The New National Anthem (arrangements of Carla Bley's music) - is his balance between lyricism and texture. The opening track on Still Life is a good example, 'Champion' begins with a fanfare, the mix of the horns is rich and their syncopation is punchy, and a perfect set up for Douglas's energetic and fluid runs. A breakdown towards the middle of the track turns into collective improvization, which also reveals all the distinct voices.

The title track 'Little Giant Still Life' begins with a memorable theme that simply envelops and carries the whole piece. The Westerlies' strong comping and accompaniment provides a gripping balance of tension and motion. Douglas' humor also shines through on tracks like 'Bunting', where a somewhat traditional introduction is subverted by dollops of the blues and low horn blats. It's not slapstick however as the moments of levity are couched in some serious music.

Little Giant Still Life is a nicely balanced and vivacious album, and seems like it would easily appeal to the casual as well as the most voracious and demanding, listeners. A definite stocking stuffer for the music fan!