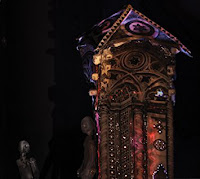 On first listen, I'm reminded of Adam Butler. His electronic sounds, tracks and later even songs published under the alias Vert had a huge impact on my experience with electronic music. Unlike say the berserk electronic music of Merzbow (though I also like the berserk ones), Vert developed his music toward the pop-song format. The first track on Ikue Mori's new album Obelisk reminds me of theses sounds and it makes me feel 'at home', setting the tone for this record.

Mori recorded her last album In Light of Shadows with her electronic sounds alone. The pieces were at least in part composed beforehand and it was a new step in her musical development. For Obelisk she took some of her pieces from In Light of Shadows, composed new ones, and arranged them for a quartet of herself on electronic, Jim Black on drums, Okkyung Lee on Cello and Sylvie Courvoisier on piano.

The album lingers between rhythmical melodic and more open parts. Both fit together well and the album keeps it's warmth in the more free parts as well.

The first track, the one reminiscent of Vert, is called 'Quicksilver' and starts as duet between Black and Mori. The beginning is open as if they were trying to find to one another. Half a minute in the Courvoisier joins and the track develops a groovy structure. Courvoisier adds a short melody on the piano that moves through the track sometimes answered by Mori's sounds. This first track is Mori's version of funky jazz.

The second piece 'Blue Moon and Yellow Dune' gives Lee a lot of space for long cello tones. The voices of the other three instruments accompany this tune in a fine and mellow way until at two minutes in when the piano breaks the structure and takes over, and the groove that also had carried this one along, breaks up. This track, also with a strong groove in the beginning makes way for the next few tracks in which the sound gets more polyphonic.

The change between grooves based on Mori's electronics or Blacks' drums and the surprising breaks in between makes the album interesting and the different cuts worth listening to. The third one 'Mozu (The Shrike)' is a fine example of that. There is a strong and clear groove for the first 3 minutes of the track. Then the drums leave their own rhythm behind to jump to a short solo. After that the music goes on in that more open arythmic pattern and all four musicians take the chance to jump right in. The short piece 'Invisible Fingers' proceedes in this free manner.


'Hotaru (Firefly)', the fifth composition, takes its time to get started. It's a very quiet track. The electronic sounds make it easy to imagine fireflys in the air. The track could work very well as the soundtrack for a night at a camp fire.

In other cuts the groove returns but never again as defining as they were in the first few tracks. The last piece 'Koya Hijiri' is the longest of the ten tracks. It is a adaption of the first track of Mori's last solo album In Light of Shadows.

I've been listening to both versions lately and they are quite different. But I can't say which version I would prefer. Beautiful as it is to hear what Mori does with her laptop alone, it is also a great experience to hear her work with different musicians together.The interplay of the four musicians conducted by Mori is a great joy to listen to especially in the case of this track.

I wrote a lot about groove thinking about this album and this groove is also part of 'Koya Hijiri' but it's a groove that is held loosely so it can jump away and explore the area, returning when the time is right. Within this last track you can find everything that is fascinating about this album comprised in one track: The different voices respect each other in their own value, each one takes its part and together they create a fine sound covering the whole area between melody and groove on the one hand and open interaction and free sounds on the other without getting lost on the way.

So in the end it might not be a freejazz album. It is more an album of electronic chamber music composed by a free mind. And the result is a warm fine listening experience.