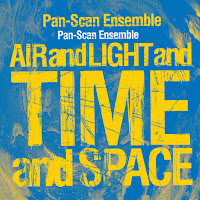 Pan-Scan Ensemble is a brand-new nonet, assembled by Paal Nilssen-Love and Ståle Liavik Solberg for a December 2016 Blow Out performance in Oslo. Thankfully, the group’s performance was captured and released, as it’s a superb example of free improvisation. Nilssen-Love’s creativity and talent has been well-documented and celebrated on this blog, and somehow he seems to raise the bar with each new release. For Pan-Scan Ensemble, he and Solberg, co-founders of Blow Out, brought together a improvising supergroup of sorts: Lotte Anker, Anna Högberg, Julie Kjær, Thomas Johansson, Goran Kajfes, Emil Strandberg, and Sten Sandell. One of the most interesting things about Pan-Scan Ensemble can’t be gleaned from this recording. The band sets up with Nilssen-Love and Solberg out front, Sandell on one side, and the horns lined up behind the drummers, alternating winds and brass. Judging by the videos linked below and the overall vibe of the album, the result is a kind of “wall of sound” that blends the individual voices into a multiphonic stream.

Air and Light and Time and Space captures 45 minutes of the ensemble, on “Air and Light” and “Time and Space.” In one sense, I was reminded of Susana Santos Silva’s Life and Other Transient Storms, which also featured Anker and Sandell. That album was also a 2-track supergroup improvisation, with big ideas in the titles and evocative playing in the music itself. In this case, “Air and Light” kicks off the album in a brief 12 minutes, and “Time and Space” takes up the remaining 33 minutes. (Although this is only available digitally and on CD, I imagine it’d make a really nice 10” double-vinyl release).

Nilssen-Love and Solberg open “Air and Light” with a spacious, percussive duet with echos of Han Bennink and Don Moye. After about four minutes, trumpet and piano punch through a space in the playing, and it’s not long until the six horns engage in a melodic call and response. Drawing on their experience in a half dozen assorted improvising groups, the players call out themes that recall blues, chamber music, and more traditional acoustic free jazz. Towards the end, a chorale section opens up, with the three trumpets in rotation around Anker. Drums and piano lay out for a long stretch, letting the section develop and flow in a few different directions. It’s a nice counterpoint to the drummers’ duet early on, and the entire group’s use of silence helps give the performance a nice sense of drama.

“Time and Space” wastes no, uhh, time getting started (forgive me). Clashing staccato blasts come flying from the entire group, an effect that works particularly well on headphones. Johansson, Kajfes, and Strandberg start to fill in space with some muted soloing, guiding the group over the course of several minutes, as Högberg, Anker, and Kjær re-enter with driving force. In its closing section, “Time and Space” transforms into a foot-stomping, synchronized powerhouse, with Nilssen-Love and Solberg keeping time, as the remaining seven players gradually peel away from the group and settle into their final solo improvisations.

Lastly, I just want to call out Lasse Marhaug, who mixed and mastered the album, and also created the album art. A talented designer, Marhaug’s album art for Nilssen-Love has become integral to the aesthetic of each one. The emphasis on “time,” the doubled band name, and the almost cellular backdrop give a rich impression of the music within, even before you’ve clicked play.