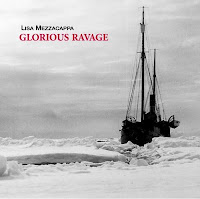 Glorious Ravage is an ambitious multi-faceted undertaking by Bay Area bassist and composer Lisa Mezzacappa. The work is organized around women, who late 19th and early 20th century,  transcended the stereotypical roles of the era and pursued their passions in science, travel, and more. On the recording, Mezzacappa works with a frighteningly talented large band (see personnel listing below) but cedes the spotlight to vocalist Faye Victor who transforms the words of the protagonists into song, and with four filmmakers, she developed accompanying visuals for live performance.

I was lucky to have the opportunity to see the work performed, complete with video, by a slightly different 15 piece ensemble at Roulette in Brooklyn a few weeks ago. Playing against the projections of the films, the full scope of the composer's vision was on display. In fact, the performance was sometimes near sensory overload - taking in the music and the movies in which surreal collages and sometimes metaphorical imagery followed the narratives of the women, who were botanists, mountain climbers, intrepid explorers, and more.

While the live performance and video added additional layers of experience, the music was robust enough to stand quite well on its own. In fact, it has taken me many listens, on the iPod through headphones, in the car, and on the stereo, to feel like I am getting my ears around the music. Easily digestible moments are interspersed with intense improvisation, and vocally, peculiar turns of phrases and near words can be thorny at times - all the makings of a challenging work that takes time to reveal itself fully.

The opening tune 'Veta' accompanies the story of Ida Pfeiffer, a world traveler from Austria in the mid-1800s. The music begins with patter from the percussion and plinks from the guitar. Victor is in from the start, singing the words that Pfeiffer penned about her experiences in the high altitudes of Peru. The vocals follow the contours of the words and their sounds, shaping them around the musical accompaniment. The title phrase jumps out from the track, and along the way, the vocals become more textural than meaningful. The second track, "Make No Plans" begins with a stilted marimba-laced looping rhythm. Victor comes in with a mix of scat and lyrics, while a chorus of deeper voices lays down a counter melody from time to time. Darren Johnston's trumpet solo, vibrant against the the guitar's textures and the swelling accompaniment, is a highlight of the track.

The mid-point in 'Heat & Hurry' is an orchestrated high -- the thick harmonies and alluring rhythm invite the listener into a lush and exotic soundscape. After a seductive interlude, sounds begin bouncing off of each other, and wordless vocals meld with a composed lines weaving through electric and acoustic gurgles and blips. This is all after the be-boppy intro shared by Victor and the band, which is followed by a moment of free interplay between the woodwinds.

I'd be remiss to not mention the scintillating introduction to the track "For the Dusky Mourner" featuring pianist Myra Melford and bass clarinetist Vinny Golia. The two, along with the percussion, create a forlorn but expectant atmosphere. As the track progresses, the bass clarinet continues to thrill - especially in a passage where it digs in over the guitar and pinched notes from the sax. The harmonium laced ending of the track is a mesmerizing feature (there is a fleeting moment that reminds me of the introduction on the Band's 'Chest Fever'). This only represents a few of the songs on the album, each one being quite interesting and different.

I possibly should have disclosed at the start of the review that I'm not that into vocal jazz. This is in no way meant to be disparaging, it's just an admission of my current philistine tendencies. That being said, I can honestly say that Glorious Ravage transcended my hangups. The work and joy that Mezzacappa took in researching the women's stories comes through, and is compelling in and of itself. However more so, that Mezzacappa, who says that she herself is not a trained composer, is able to make such an arresting and - at times - difficult music work so cohesively is a noteworthy accomplishment. Plus, the band is top notch, making the music even better. This is an album and story that is well worth digging into.