Dedicated to Sunny Murray, the greatest drummer-percussionist of all, whom I never had the luck to watch live, but whose recordings have made my mind and heart move into billions of directions. 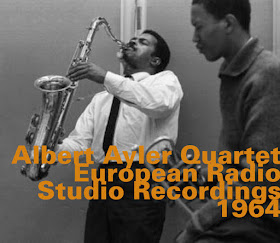 I must be frank, while writing this review: Albert Ayler’s various formations played a significant role for me as a listener of free thinking music. His holistic vision of free artistic expression made my mind think and communicate in quite different ways than before.

Ayler put his soul in his music. He had no less to offer. The impact of his death, only at the age of thirty four years old, was felt accordingly. And still is today. The day his body – after a probable suicide – was washed upon the banks of the East River, the world lost as much as when Rosa Luxembourg’s body, during the demise of the Spartacist uprising, was thrown in the Landwehr Canal in Berlin by the fascist Freikorps.

1964, some years before his ultimate death, was a good year for jazz. Fire music was beginning to change, forever thankfully, what we now call jazz. Ayler, in his own words, was the holy ghost during all this. Kind of an outsider. But he was not alone.

This quartet, a dream team of sorts, was then four young people struggling to find room to express themselves. Gary Peacock on bass, Don Cherry on cornet, Sunny Murray on drums, and Ayler on tenor saxophone. Very few would give time and space for this crazy shit back then, and most of them were in Europe. Each of the individuals that participates in these recordings (taken from sessions for the Danish Radio in Copenhagen and from Hilversum in the Netherlands, both at the Fall of 1964) made a career of few compromises. But Ayler’s time was limited. It’s as if he knew it and blew so hard and strong so that the voice of his soul could make even with the little time it was offered.

I thought really hard about the possibility of writing a straight-ahead review. Colin Green’s great review of another great recording, SME’s Karyobin, set the bar really high for archival reviews (well, Derek Bailey didn’t like the recording, but what did he know?), but I cannot, really. This is out of the ordinary, adventurous, free from all restraints music, made from people who probably had empty pockets. It needs to be listened with intensity in order to match the ferocity of their collective sound. Sure, there’s a big list of great artists that treated the saxophone as a weapon of critical thought and expression. But none – and I say zero -– achieved the ferocious attack against normality that equals Ayler’s playing. Apart from him soloing, the collective sound they achieve many times acts like a drone, a wall of notes.

Before the end of this so called review I must say this: maybe this piece is full of exaggerations, but, please, stick to the following. Go buy this CD, listen to its wild and anarchic blowing, its syncopated aggressive bass lines, the polyrhythmic barrage of Murray, and the chameleonic playing of Don Cherry. The say with me, blow hard, blow fee for all of us Albert Ayler, wherever you are.