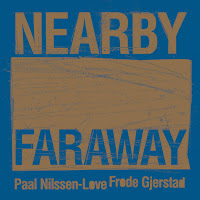 Much like fellow Scandinavian reedist Mats Gustafsson, Paal Nilssen-Love is all over the free jazz globe. Touring with some 200 plus dates a year, running his own record label (PNL Records), leads Large Unit, and much much more. For a deep-dive into the mind of PNL, head over to Eyal Hareuveni’s interview here.

Norwegian reeds player Frode Gjerstad has quite often been mentioned here on FJB, but I would still like his profile to be a bit more raised, simply because he deserves it. He’s leading his own trio with Paal Nilssen-Love and bassist Øyvind Storesund, but has of course played in numerous groups and has collaborated with a very impressive number of ‘profiles’ on the free jazz scene. He’s often working in the higher registries and I was really excited to hear how this would work in a duo setting with the style of the straight-to-the-point, hard hitting, intensive and borderline rocker Nilssen-Love. On the other hand, I could see that Frode has brought Bb and contrabass clarinet’s to the session as well. Very promising indeed.

We get 9 songs with lengths of 2:37 to just above the 9-minute mark. I’d say this is a very nice ‘sampler’ that could be used as an introduction to the world of free jazz. I will certainly use it with some of my friends who has not yet realized what they’re missing. This album will give them relatively short songs with 4 different brass instruments, and with a drummer who must be close to the pinnacle of his career.

Some of the songs are more searching, contemplative and slow moving. Others more passionate, intense and fast. The duo setting provides a peeled off and intimate feeling throughout the album and I can clearly hear both Frode and Paal being fully focused on the task at hand. On some songs Frode is in the lead, and on others Paal provides texture and a scene on which Frode can move freely in, out and across, and on some songs they both travel together tightly interwoven. For me, the highlight on this album is the 9 minute ‘Flying Circus’. PNL’s thundering drums rolling constantly throughout the song together with the intensity of Frode is a delight to listen to. This is also how I enjoy PNL the most. No holds barred, full throttle and quick twists and turns.

One thing is for certain; Frode Gjerstad and Paal Nilssen-Love are two of the most bright shining stars on the free jazz heaven today.