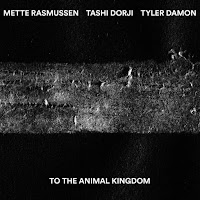 In 2015, Mette Rasmussen and Chris Corsano released one of the best albums of the year. In 2016, so did Tashi Dorji and Tyler Damon. What made All the Ghosts at Once (Relative Pitch) and Both Will Escape (Family Vineyard) so powerful, in part, was the fresh, fluid energy with which each half-drums duo improvised. Nor did either album take the risk of over-relying on its audience’s powers of attention, choosing instead to grab hold of the ear and lead it on irresistibly. As organic and necessary as these musical dialogues seemed to be to the musicians involved, they were like oxygen to their listeners—easy to take in, hard to do without.

So when To the Animal Kingdom was announced, it was only natural to wonder how these two great duos would survive colliding together. Reconfigured as a trio (it’s tempting to imagine what we’d hear were Corsano on the recording) the saxophonist, guitarist, and drummer come together in a way that epitomizes John Corbett’s description, in A Listener’s Guide to Free Improvisation, of what happens when a group of two improvisors becomes three: “Take the duet and add an X factor.” But that’s not to suggest that Rasmussen’s contributions feel “added” on to the existing Dorji/Damon duo dynamic. In reality, any one of the three can be heard functioning as that triangulating “X factor” at any given moment. In this way, in Corbett’s words, the “possibilities” multiply “exponentially.”
For one obvious example, the title track opener finds Rasmussen and Dorji engaging in a kind of high-intensity joust for almost a minute before Damon enters the fray with abbreviated tom rolls. From there he continually shifts the collective dynamic, adding density, volume, and color to escalate his playing as if to drive a wedge between his two companions—or between us and them. When he tapers off in the middle of the track and again closer to the end, he pivots the context in a way that the trio formation, per Corbett’s “X factor,” is especially primed to benefit from.

Another of Corbett’s comments—that “the trio has an approachable level of complexity”—proves true here, too. As with much free improvisation, part of this complexity comes from the musicians’ playful take on their roles in the trio. While he can certainly pummel and thrash the kit, Damon can also bring a sometimes delicate melodicism to his drumming, the chiming gong-work that opened Both Will Escape in evidence near the beginning of “To the Heavens and Earths.” At the same time, Dorji and his metallic tone tend often toward the percussive, whether stabbing (as on the first piece) or more intricate (as on the night-music opening of “To Life”). And isolating Rasmussen often reveals an amount of repetition in her playing that’s surprising, given the overall effect, balancing lyricism and rhythmic patterning.

The result is sensitive but athletic improvisation that has the flexibility to pull in multiple directions at once without violating the boundaries of the three improvisors’ distinctive voices, at times no doubt approaching, to borrow once more from Corbett, the level of “sublime communication.”