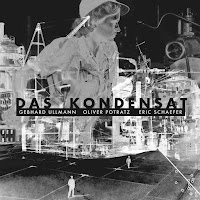 I know I start too many reviews like this "[album x] has been in heavy play on my [various devices] for quite a long time now..." And so it goes, Das Kondenstat has been in my car stereo and on my iPod for months now, and every time I listen to it, I begin thinking of my review and then my attention is sucked into the music. It is, to my ears, a new template for electronic/acoustic modern jazz.

Released on the increasingly important WhyPlayJazz label from northern Germany, Das Kondestat is the prolific reedist Gebhard Ullman (who seems to travel between Germany and the U.S), bassist Oliver Potratz who plays with Ullman in the bottom heavy BassX3, and drummer Eric Schaefer who works with Joachim Kuhn and Michael Wollny among other projects. In this trio they all take on electronics to supplement, and sometimes supplant, their traditional instruments: samplers, loopers, and modular synth all play an important role here.

Starting with the opening track, 'Variations on a Master Plan #3', a theme that seems to permeate Ullman's work, the synthetic sounds are front and center. The analog synth generates a burbling pattern that Schaefer and Portratz enliven with a thick drum and bass groove. Ullman jumps in with a effect heavy tenor sax and the trio fills in much more sonic space than expected. A breakdown in the song, which leaves the bassist playing a plodding downbeat line and the drummer playing an ambient solo, allows the trio a chance to rebuild into a steady groove with whirls of synth and playful looping saxophone. The follow up 'Lady in the Sky' begins with a solid rock backbone and Ullman's overblown sax. The group resolves to a tight beat, and after Ullman quickly finds his footing, he delivers an energizing passage full of melodic invention and edgy intention. Later in the sequence, "Grizzly Bear" begins with arpeggiated chords from the bass and a sample speaking in a British accent "surviving a Grizzly attack and still loving the great bear ..." touches on the absurd and symbolic. The sample about the bear attack continues through the track, while extremely active bass lines take on the prominent role. "Desert ... Bleue ... East" begins like an American folk tune, echoes of Westerns and wide open space fill the expanse of space in Ullman's ambient melody, while a chorus of R2-D2s whistle in the distance.

There is more as well, in the space of 40 minutes, the trio packs in 11 tracks, keeping a tight reign on the music by eschewing extended solos and showmanship. The construction of each track is detailed and most likely planned out, the result of seasoned improvisors willing to lose themselves in their craft.

While this fusion of jazz and dub/electronics is not new, having roots in the mid-to-late 90s, Das Kondestat does it right. The trio brings a refreshed vim and vigor to the sound, and in turn, opens up new musical possibilities. This is a trio to keep an ear/eye on!

A very sad news that I would like to report:
Roswell Rudd, trombonist, the instrument’s first major practitioner in the avant-garde jazz movement, died Dec. 21 after a protracted battle with cancer. He was 82 years old. His death was confirmed by his record label, RareNoise Records