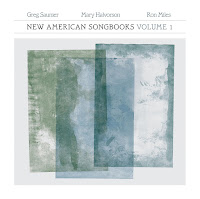 
It would not be an exaggeration to say that it is literally impossible to find someone who genuinely loves jazz - be it a musician, fan or critic - that hasn't had some type of exposure to the songs in what has come to be known as the Great American Songbook. Famous numbers like Vernon Duke's "April In Paris", Cole Porter's "What Is This Thing Called Love?" and many other show tunes that became jazz standards are still regularly played to this day. New American Songbooks, Volume 1, a Sound American release which features a collaboration between Greg Saunier (drums), Mary Halvorson (guitar) and Ron Miles (cornet), takes the past format - adapting music to the idiom of jazz that may not have been written with extended improvisation in mind - and applies it to more contemporary compositions.

Unlike the Great American Songbook, the majority of the repertoire here is not made up of songs that many jazz fans may know by ear, with John William's "Luke and Leia (From Return of The Jedi)" being the most ubiquitous track by far due to the immense popularity of the Star Wars series. Saunier, who normally operates as part of the indie-rock band Deerhoof, commented in an interview with Sound American that:

"[the band] didn't end up choosing "Happy Birthday" or "We Will Rock You" or whatever American song is the most requested at karaoke. Instead I think we went for a Fantasy New American Songbook, a surreal wishlist. We gave ourselves a perverse thrill by choosing under-appreciated gems."

These gems include overlooked Beach Boys (Brian Wilson) tracks ("Little Pad"), songs by singer/songwriters like Elliot Smith ("Everything Means Nothing to Me / Last Call") and Fiona Apple, whose "Jonathan" was released in 2012. The trio also wades into classical waters in Vincent Persichetti's "Symphony No. 6 Mvt. II", 70s pop with "I Woke Up In Love This Morning (from The Patridge Family)", and revisits an underrated Duke Ellington/Billy Strayhorn collaboration in "Day Dream."


The energetic "Jonathan" is an album highlight. The band takes Apple's tune into overdrive, with Halvorson's rapid guitar, which takes the place of Apple's piano, and Saunier's ferocious, cymbal filled runs driving the track. After Miles finishes the playful melody, he lets loose, the cornet becoming forceful and free around the 1:50 minute mark. Halvorson has a brief moment in the spotlight towards the end of the song, playing knotty abstractions of the previously relatively controlled accompanying theme.


In terms of the motifs of the pieces, Miles' cornet often takes center stage, but nowhere is that more apparent than on the fantastic rendition of "Luke and Leia (From Return of The Jedi)." The cornetist gives a passionate performance that does justice to William's compelling melody. Behind the cornet, Saunier's drumming skillfully moves between the restrained and the more frantic and dramatic. Halvorson contributes by providing hazy notes that echo beautifully throughout the track that are occasionally used to create a great tremolo-like effect as Miles' cornet rises through the melody.


Over the years, Halvorson has become known for her unique style, which includes a tendency to bring a wide range of effects to her instrument. On "Everything Means Nothing To Me/Last Call", the guitarist - a huge Elliot Smith fan - stands out. Halvorson's hectic and adventurous interpretation of the ascending main melody of "Everything Means Nothing to Me" beginning in the 1:20 minute mark is particularly impressive. The guitarist is also crucial to "Last Call", providing a rock-tinged edge to proceedings as the cornet interprets the vocal melody. The consistently vibrant drumming is key here as well, with Saunier playing with the intensity of a solo throughout large portions of the track.

With the level of understanding between these three, it's extremely hard to believe that this is Halvorson and Miles' first time working with Saunier. The band shines throughout the LP's 40 minutes, taking on a wide stylistic range of compositions and passing each test with flying colors. Although these talented musicians have been quite busy lately, Halvorson and Miles appearing on multiple jazz releases this year and Saunier drumming with Deerhoof and producing with Xiu Xiu, here's hoping that someday they reunite. New American Songbooks, Volume 1, is a superb record that comes highly recommended.