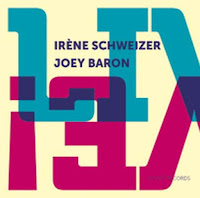 Most musicians hope for applause at the end of a performance; far fewer expect it before the concert begins. But when Irène Schweizer and Joey Baron took the stage for their set at the 2015 Unerhört-Festival in Zürich, the audience began to clap—an expression of well-deserved anticipation for the accomplished duo. Whether buoyed by the warm reception or already raring to go (I suspect the latter), Schweizer and Barron don’t fail to make the most of the audience’s excitement, offering up a 50-minute show so energetic, dynamic, and fun that Live!—exclamation point included—seems the only appropriate title.

The set opens with “Free for All,” Schweizer clearing the air with a single percussive report before the duo begins corralling fragmentary ideas toward a cohesive if off-kilter swing. Immediately in evidence in these first few minutes is Schweizer’s special blend of almost impishly playful musicality and breathtaking free improvisation. In several places across the set, try to catch her wheeling from one idea to another, each compelling enough to be fleshed out vertically into a full tune but kept instead as highly reduced units to be arranged horizontally next to others. Not to say her ideas don’t develop satisfyingly or that they rely on pure juxtaposition: see how the toy-light swing that opens “Up the Ladder” builds into the grand swells in the middle of the piece—and from there into the funky groove near the end. Part of Schweizer’s ability to bridge these fragments and styles may have to do with her superior instrumental powers, particularly the ease with which she can pump out irresistible ostinatos with her left hand—as she does on “Jungle Beat II” and “Blues for Crelier”—while spinning unpredictable lines with her right.

It’s also Schweizer’s knack for holding down the whole keyboard that makes the presence of a bassist virtually unnecessary. And in fact she does have a history of duets with drummers, her discography reading like a who’s who of free jazz drumming: Louis Moholo-Moholo, Günter “Baby” Sommer, Andrew Cyrille, Pierre Favre. It’s tempting to doubt that Joey Baron will stand up to Schweizer’s 2015 percussive partner, Han Bennink—whose bold and tricksterish playing so well matches the pianist’s—but of course he does just fine, adding his own unique filter to Schweizer’s sensibility. Quite the veteran himself, Baron has a well-honed intuition for when to follow his partner and when to chart his own course. And Live! provides him ample opportunity to demonstrate his range, from the firm swing of “Free for All” and “Blues for Crelier” to the subtle mallet-work of extended technique–vehicle “String Fever.” He even gets a few solo spots to show off his chops. But it’s when they’re improvising together that Schweizer and Baron are at their best here—where the push-pull of their interplay strikes its vital balance.

The set picks up in pace toward the end, finishing with back-to-back-to-back four-minute tunes. “Saturdays” features some of the album’s most cerebral and moody playing, while as already hinted, “Blues for Crelier” is a foot-tapper. Closer “The Open Window” begins with erratic improvisation, dropping from there into a fleet waltz. In the piece’s penultimate seconds, Schweizer’s playing becomes thinner and thinner until it suddenly vanishes in thin air, leaving Baron to ride out the last bit of the concert alone. Even when she stops playing, Schweizer draws cheers—such is her magic talent.