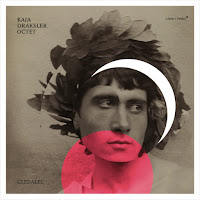 If you’ve heard or read about this album, but not yet listened to it yourself, let me just say that you have almost no idea what you’re in for. I’ve seen few reviews really capture what this album seems to be about, and I know I’ll also fall short. Partly, that’s because there are no clear predecessors for Gledalec in Kaja Draksler’s discography. A massive and visionary song cycle, Gledalec blends chorale settings of poetry, composed chamber-like passages, and extended improvisation, weaving together threads of Cecil Taylor, Mengelberg, Boulez, and Ligeti.

Draksler’s assembled a crack octet, with herself on piano, Björk Níelsdóttir and Laura Polence on vocals; Ada Rave and Ab Baars on clarinet and tenor sax; George Dumitriu on violin and viola; Lennart Heyndels on bass; and Onno Govaert on drums and percussion. The lyrics for each piece are drawn from the poems of Pablo Neruda and Andriana Minou, except for the opening 5 minutes, a gorgeous setting of Sixteenth century Slovenian composer Jacobus Gallus Petelin’s “Mirabile Mysterium,” which flows ethereally into “Births,” a Pablo Neruda poem that Draksler uses as a means of gently prying apart Gledalec’s many layers. Dumitriu guides the transition between the two, but it’s Rave and Baars who drive forward the tension in Draksler’s composition. A sharpness in the voicing counters some of the reflectiveness in Neruda’s lines, in addition to setting words about birth and death in women’s voices.

This motif is picked up with “Omphalomancy,” a reference to the folk belief that a child’s navel will reveal how many children a mother will have. In the lyrics, a particular omphalomancer “could only guess the past / everyone was so impressed / and they paid a lot of money / to listen to their life story / again and again and again.” Draksler’s composition, which prominently features Dumitriu and Heyndels, loops around itself before ending on a brief, sharp coda. “Bîzdîbocul” picks up with the two strings in dialogue with Draksler’s prepared piano. The first of several improvised interludes, each with different small pairings, “Bîzdîbocul” is also the first real glimpse of the scope of Gledalec. At this point in the album, only the third track, there’s been a traditional chorale and irreverent poetry, and now comes the free improvisation. Following “Bîzdîbocul” are “A Carnival of Words” and “A Promise Is a Promise,” both of which showcase Níelsdóttir and Polence’s improvisational creativity. Draksler’s piano knits the tunes together, her comping and preparations grounding the whole in a free-jazz context, even while the bass and drums lock into a swinging almost 1940s-esque rhythm, against which Níelsdóttir and Polence recite Minou’s tongue-twisting couplets, “I promise not to forget / so I must remember not to forget” and “I must not forget to remember not to forget / that I promise not to forget.” As the lyrics are dis- and re-assembled, Draksler plays a stunning solo that soon falls beneath Rave’s bold, soaring tenor solo. Later, on “The Builder,” Rave switches to clarinet, and Baars steps forward with a superb sax solo.

It’s tempting to continue a song-by-song recitation of the highlights of this album, but truly that would rob you the sensation of surprise. Though I loathe spoiler alerts, generally, I think they apply pretty well here. So many delightful twists are woven into this album, and much of its excellence comes from Draksler’s composition and direction. Her setting of Minou’s “Omlettio Ad Absurdum” is easily one of the most daring moments of any avant-garde album this year. But it is ultimately the players who make the album, and this octet is phenomenal.