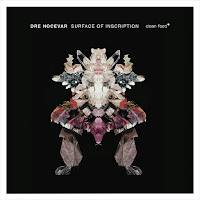 This is the second draft of this review. In the first one, I wanted to walk you through every track of this wonderful album and tell you what is going on. However, after I read what I wrote it felt as if I had missed the point, which is that this album is amazing and full of surprises.

Dré Hočevar assembled a bunch of great musicians: Elias Stemeseder on piano, Bernardo Barros on electronics, Weston Olnecki on brass, Michael Foster on reeds, Charmaine Lee on vocals and himself on drums. Then, they chose a special way to record the different tracks. From what I understand from the Clean Feed homepage, they recorded different takes of the tracks and then one of the musicians played against the backdrop of the previous recorded construct.

To me as listener this description makes perfect sense. To my ears the different tracks circle around one musician without reducing the others to simple background sound. On the first it is Michael Foster on reeds. On the next track I hear a scratchy, swooshy sound that seems to be the main layer of the track, build by Bernardo Barros and / or Dré Hočevar. But while listening you hear a lot more going on. All the musicians tribute to the complex sound of the track and on the long run to the whole album.

The whole album is full of surprises. I will name a few:

The first track is a blast without drums. That is surprising because I have never heard such a sound. Michael Foster's clarinet sounds a bit like a woodpecker on speed. I needed a YouTube clip to verify that the sound I heard was in fact produced by Michael Foster. Three minutes of pure intensity and pressure. It is also surprising because I can hear no drums in that first track. Quite an opening for an album conducted by a drummer.

This is the second surprise, though one can see this coming if you are familiar with Hočevar's other works. His way of playing the drums is unique. Often it sounds restrained, serving the greater good, which is the song. If you see him play, which I highly recommend, at least via YouTube, you will see him work his way through the different sets. While he often chooses the softer sounds, the cymbals, the brushes etc., he is always fully present. For example, on “Surface of Inscription” this holds true, he never dominates the band or the different tracks but he is always very present and makes the different songs special with every sound he plays and doesn't play!

I used the word ‘song’. That might be wrong but it takes me to the next surprise. Most of the 15 tracks on “Surface of Inscription” are short like a common song. Dré Hočevar's last release on Clean Feed was “transcendental within the sphere of indivisible remainder”, an almost 50-minute-long coursing through all kinds of sounds. It’s a very enjoyable piece of music. The tracks on “Surface of Inscription” are, compared to that, a surprise in length. They are not light-weight but rather have a sort of sketch-character to them which fits perfectly. And I enjoy it very much to slowly move from track to track or even pick different tracks to listen to them over and over again. I recommend part 1 and 2 of “target domain of infinity.”

Which takes me to the next surprise: It is Charmaine Lee. I had not heard of her before. She is responsible for the vocal parts on the album, and it is amazing. I'm reluctant in listening to voices in jazz, but Lee does it exactly the way it has to be. There are no words, only sounds. The voice of Charmaine Lee is ‘just’ another instrument in the ensemble and a beautiful one. I searched, as one does, the internet to find more about her. On her own hompage there are some video-clips of her work. I think she is especially good in cooperation with other musicians and I like her work with Nate Wooley in particular: https://charmaineleemusic.com/group/

It is not fair to name one of the members of the band as a special surprise without naming the others, and I admit that it isn’t Lee alone who makes that album special. I chose to mention her because the beautiful usage of the human voice was a special surprise to me. The other musicians are all more than just good. It is a extraordinary ensemble.

The calm but complex sound and structure of the album had me listening to it over and over again. I could name every musician of the ensemble over again and state their unique part in the album. But, to quote a cliché, the sum is more than the adding of the parts (or is that just a German saying?) the sound has not a single note to much. In all the calmness, to which the track “x nets, arrays, containers” is one of the few exceptions, lies a great tension. It is a tension that is not easily solved, and that might be the one thing that is no surprise. The album is worth every minute of listening. Over and over again. For me it is one of the albums of the year.

P.s.: The names of the different tracks are also surprises. I can't really get my head around them and try to find meaning in them. Until now they are an unsolved riddle.

P.p.s.: You can find some live incarnations of the music on YouTube. For example here: