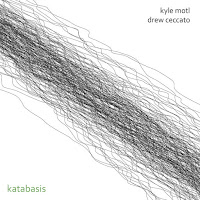 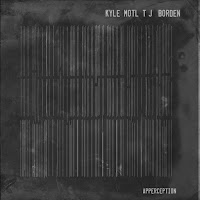 The title Katabasis refers to "a descent of some type, such as moving downhill, the sinking of the winds or sun, a military retreat, a trip to the underworld, or a trip from the interior of a country down to the coast."* Taking this metaphorical trip with Motl is Ceccato, whom Motl works with in drummer Abbey Rader's West Coast Quartet (see First Gathering, 2016).

Ceccato has a sound that is simultaneously raw and controlled. It reminds me of times of the more subdued side of Brotzmann's playing, especially when he's pushing, but still holding back. Motl responds with an empathetic and kinetic approach to the bass. The two have a wonderful rapport and while the song titles all seem to be words that refer to descending, the music doesn't seem so bound by gravity. Lyrical themes and evolving ideas bounce off of each other in unexpected ways.

On Apperception, Motl joins forces with cellist T.J. Borden on a romp through a resonant acoustic landscape. Motl and Borden's approach vacillates between the typical range of their instruments and well into the extended technique. Playing with many timbres and tones, they create a fascinating, if not always easy to digest, palette of sound. While there are less tangible melodies on this album then on Katabasis, there is an incredible amount of textural wealth. In fact, the final track 'Strawman Apology' is a gripping example.

Two strong, adventurous albums that continue to reveal nuances on each listen.

*if you trust Wikipedia definitions, that is.
Paul on Sunday, December 03, 2017
Share