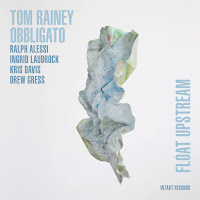 In the world of free jazz, there is no single approach to interpreting the “standards” - you’ve got some musicians (Braxton, for example) who seem to prefer moving within the same harmonic/melodic realm in which the original pieces themselves were composed. Others take a far looser tack that often leads to a complete deconstruction of the source material, after which there’s not much left that’s recognizable to the listener. Tom Rainey’s group Obbligato works somewhere between these two extremes, choosing neither strict adherence to nor extreme deviation from the blueprints of the standards that they’re working with. The result is a fresh take on compositions that, for some, might have gotten a bit stale after decades of more-or-less faithful (re)interpretation. Consisting of Ralph Alessi on trumpet, Ingrid Laubrock on saxes, Kris Davis on piano, Drew Gress on bass, and Rainey himself on drums, Obbligato will undoubtedly get the attention of anyone who has kept up with these artists - each one of them has been involved with some of the finest releases of the past few years (including a previous release together, reviewed here), and to see them all working together on a set of standards is bound to, at the very least, intrigue even the fiercest free jazz fanatic.

The album begins with the languid romanticism of “Stella by Starlight” - while the piece’s opening moments find the rhythm section mostly reigning in their wilder impulses, Alessi and Laubrock are a bit more exploratory; the two circle one another in sinuous arcs that, despite their playfulness, never spin off into the intrepid excursions that the the players are known for in other contexts. As the tempo picks up, though, Rainey and Davis each unveil tiny hints of the abandon they’re capable of - Davis sends out tiny, supercharged fragments of melody, tinged with dissonance, and Rainey’s constantly-shifting shapes are like the bubbles that form in a pot of boiling water, pushing ever outward against the boundaries of the composition. The next track, a take on Sam Rivers’ “Beatrice,” loses none of the free-floating wistfulness of the original, but nevertheless manages to make itself distinct. The tight interplay between Alessi and Laubrock is a wonder in itself, and the tiny forays into the avant-garde that they make (some overblowing here, a shambolic cluster of notes there) help to maintain a small, yet powerful, element of tension. The endearing mischief of Cole Porter’s “What Is This Thing Called Love?” is here refracted through a cracked kaleidoscope, with Rainey’s restless cymbal-taps and Gress’s walking bass acting as the catalysts that push the others into more and more frenzied territory. When Davis finally joins in around the two-minute mark, it’s in a mode that readers of this blog (and previous listeners of Davis’s work) will already be familiar with - manic cascades of notes, wild oscillations, and a percussive attack. “What’s New,” a 1939 standard composed by Bob Haggart, opens with an evocative solo by Gress that leads perfectly into the soft shades of melancholy that Davis conjures up. Shortly thereafter, Alessi and Laubrock launch into a twisting, diaphanous conversation with one another, while never tarnishing the piece’s delicate mood. Likewise, Rainey keeps a soft touch, his rhythms and brushwork acting more as textural swathes than time-keeping devices. “There Is No Greater Love” moves the album in a more energetic direction, with Rainey taking the first couple of minutes to offer up a spirited, elastic solo. The other players take his lead, Laubrock and Alessi in particular exploring a range of melodic paths that criss-cross one another, flit off, and eventually dovetail again. The one non-standard, “Float Upstream,” is unsurprisingly one of the more adventurous numbers: the horns take more tonal risks, Davis’s exquisite piano-work acquires sinister undertones, and the composition itself is knottier and more abrasive than anything else here. Its explosive conclusion is a wonderful palette-cleanser before the album closes with the dim-lit tenderness of “I Fall in Love Too Easily.”

To many avid listeners of “free” music, the standards can often sound mawkish and overly saccharine. Admittedly, my first listen-through of Float Upstream left me with a syrupy-sweet taste in my mouth that, while not unpleasant, certainly didn’t give me the intoxicating rush that I can get from, say, Davis’s Rye Eclipse or Ingrid Laubrock’s Anti-House recordings. Upon further listens, however, I came to appreciate the admittedly difficult work that Obbligato have set themselves with this project; approaching the standards as they do, from an angle of avant-garde experimentalism, is very likely to be an exercise in restraint - it calls for toning down your wilder impulses and “playing it straight,” so to speak, while still putting enough of yourself into the arrangements so that they don’t seem sterile. In this regard, Obbligato have definitely put together a sublime set. The standards here are handled respectfully, but not with kid gloves, and the result is a refreshing re-examination of these pieces and the power that they have to capture us and hold us in awe.