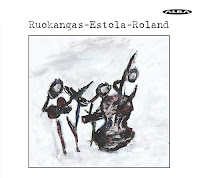 This recent release featuring guitarist Heikki Ruokangas in a trio format with Olli Estola (drums) and Jakob Roland (double bass), is an excellent showcase of straight ahead jazz and free musics, which is encapsulated within eight cuts. These are comprised of six originals from Ruokangas and two standards, ‘Alone Together’ and Irving Berlin’s ‘How Deep Is The Ocean’.

The opening track ‘Boat Voyage’ starts with a charming chord/melody from the guitar that is joined by the others after the first time through, which then abruptly stops with the sound of amp buzz and hum before opening out into a free passage of play not confined by regular pulse, where Ruokangas really gets his thing going. There is some great playing happening within this section, where shadows of his former mentor Raoul Bjorkenheim can at times be heard, before the return of the original motif. The second track ‘Grip De Sip’ features a synth sound on the guitar, which is used to good effect without it being gimmicky or too synthetic, and it makes for a nice contrast in the context of the overall album. After an understated but very pleasant and straight ahead version of ‘Alone Together’, the swinging and slightly angular motive of ‘Sailfish’ (one of a few tracks with a nautical theme) forges ahead, which gives ample room for both Estola and Roland to bring their solos to the fore. One of my favourites on the album is the cover of ‘How Deep Is The Ocean’, which manages to balance everything that is good about the album into this one track. It swings, it has impact, freer solo passages ornament the classic melodic line, whilst bringing a freshness without suffocating it or delivering a lifeless museum piece. The other track that I mustn’t fail to mention is the beautiful instrumental ballad ‘Autumn Is Almost Here’ played on acoustic guitar and supported very empathically by the bass and the subtle colouration of the brushes on the drums. Again a more straight ahead jazz piece, but one worth hearing and more so for the parity between the reflective and poignant melody and the melodic soloing which is very much an extension of the melody in it’s derivation.

Without doubt this is an excellent album, and the promise that this trio show on this release should surely hold good for the future. What Ruokangas has in his playing is a great awareness of the jazz tradition from the reproduction of classic tunes into instrumental sojourns whilst delivering a more contemporary language, which incorporates dissonance, varying timbres that work well in the service of the music, exceptionally written melodic material, and well worked improvised material that demonstrates the historical lineage of this ever growing stylistic genre. One criticism I would have of the album is that maybe it tries to do too much, and when sitting and analytically thinking about the music in that way it does seem to, however, when listening to the music and enjoying it for the collection of sounds that it comprises it would seem that the mixture that has been concocted is one of fine balance and harmony.