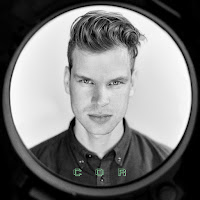 2017 was Christian Lillinger’s year. He was awarded the prestigious SWR jazz prize, he founded his own label Plaist Music, he released great (and successful) albums like We Know Not What We Do with his band Amok Amor and Dicht, his duo with Tobias Delius. Apart from his already existing projects like Grünen, qÖÖlp, KUU!, Schnell or Gropper/Graupe/Lillinger he also initiated a new one, Punkt.vrt.Plastik, with bassist Petter Eldh and pianist Kaja Draksler. However, his most exciting project is GRUND, a septet consisting of members with whom Lillinger has interacted and worked together in a wide range of combinations: with bassist Robert Landfermann and pianist Achim Kaufmann he’s the wonderful piano trio Grünen, with Tobias Delius (sax, clarinet) he plays in the above-mentioned duo, Pierre Borel (alto sax) is a part of Schnell, and with Christopher Dell (vibraphone) and Jonas Westergaard he forms another great trio.

COR is GRUND’s fourth album, after First Reason and Second Reason (both on Clean Feed) and Grund (Pirouet). To cut a long story short - it’s their best so far. As usual, GRUND’s music is partly notated and partly improvised. On the one hand, Lillinger experiments with sounds on this album, no matter where they come from, whether he finds them in new classical music, improv, electronica or jazz. Even if it’s a cliché: the journey’s the reward, he wants everything to be possible in his approach. On the other hand, the band creates different kinds of energy levels that increase and decrease constantly. In order to achieve this, the compositions are often about time, about different tensions, about density and expansion.

This becomes obvious in tracks like “Kubus“ and “Dralau“, for example. The first one begins with unison saxophone themes, in the course of the piece some become faster, some slower. The hyperactive playing of the whole ensemble intensifies the already tense atmosphere. The second one presents a hectic off-hand head, the saxophones act like MCs (drum’n’bass is another sound influence). Vibraphone and bass counter the head with melodies that are rhythmically different. The track seems to come apart at the seams, which is also the result of improvised high speed soloing.

All this is interesting and exciting and would guarantee a very good album, but the reason why it’s exceptional is the fact that there are absolute highlights: “Welt am Draht (Lnch)“ is a composition based on different layers, which open up different spaces with bowed cymbals, vibraphone, basses and the inside strings of the piano. Achim Kaufmann also plays the Fender Rhodes on this track, a new element Lillinger has introduced on this album. Although the band only uses acoustic instruments (with the exception of the Fender Rhodes, of course) the music sounds as if it was
completely electronic, shrill space sounds ricochet through the air. The title is inspired by Rainer Werner Fassbinder’s 1973 series of the same name and the films by David Lynch, whose name is only hinted at here (Lnch). Although the track is spooky, off-the-wall and psychedelic, it also deals with mere beauty in a bizarre soundscape. It reminds me of the music of György Ligeti.

The second outstanding piece is “Carotis“, which starts with a weird flowing pulse created by Robert Landfermann’s bass, from which a solo by Tobias Delius is culled out. Like in “Welt am Draht“ the Fender Rhodes, the piano and the vibraphone display a dense atmosphere consisting of actually isolated parts, echoes from Borel’s saxophone are heard. The result is a warped mesh, again the composition tends to total deconstruction, however, in the end the clear structure and the melodies are back and restore a certain order.

Each of the nine compositions on COR is a fascinating, complex cosmos, there’s a lot to discover. Christian Lillinger says that for him “this band is an organism that makes no compromises“. It’s his dream constellation of an ensemble. Finally, the album proves that Lillinger is not only a superb drummer (to me he’s the most interestihttps://www.plaist-music.com/ng one at the moment) but also a great composer.

Although it’s only January I can’t imagine that there’ll be ten better albums this year. One of the best albums I’ve heard recently.

COR is available as a CD, a download and on vinyl (limited 180g edition).

You can buy it from https://www.plaist-music.com/

Listen to a snippet from “Welt am Draht“:

and watch “Pferdinant“, a track from Grund live: