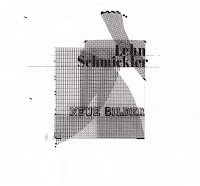 Marcus Schmickler is a Cologne-based composer and musican, producing his sounds via his computer. I saw him live on stage one or two years ago: a tall man standing behind his computer, concentrated and calm, though the sounds he produces are wild and often confusing and his music is rather abstract. Through a little internet research, I realized that his compositions are based on a rather complex theoretical background, which makes me question if I am the right person to write about his music. I mean, I don't know the programme he uses. I do not produce electronic music myself, and I lack the theoretical background Schmickler has built around his compositions.

But continuing on ... where Schmickler uses the computer and digital sounds, Thomas Lehn works with an analog synthesizer (at least on his collaborations here). He also lives in Cologne and will celebrate his 60th birthday this year (Congratulations!!) Besides his duos with Schmickler he is a worldwide active musician with the piano (lesser in recent years) and the synthesizer. He performs composed works for electronic music and improvises live.

On their album  Neue Bilder (New Pictures), the duo presents two tracks of live performances, each title names the date of the event.

Track 1 '12022016' starts with some long whimping sounds, two, three, four of them. Clicking noises say hello, and as you might already know it is difficult to describe abstract improvised electronic music with words used for music in a more "classical" sense. After three minutes a plane lands somewhere and some kind of radiowave gets disrupted. Six minutes in, an electronic wind moves through some kind of desert, building an echo (I don't know how!) before someone tries to play an old vinyl that cracks and hisses. That cracking sound gets reproduced and amplified and a lot more is going on. In fact, it takes around 14 of the 17 minutes of track one till I hear sounds that evoke some associations with instrumental sounds.

Track 2 '9112013' (recorded more than two years earlier) continues the journey through a soundscape that is not mapped out - at least not with the usual instruments. (I have to say that Schmickler and Lehn are by far not the only ones moving in that area. There are a lot of musicans creating abstract electronic music: Merzbow, Microstoria, Mouse on Mars, Ikue Mori and others. But Schmickler and Lehn are rather radical in their approach. And the difficulty in putting words to this kind of music remains the same with almost all of them.) This one starts with more distortion, more clicks and cracks and the longer sounds follow only after the first minute.
Both tracks carry a tension with them as they move between intense and loud parts and almost absolute silence, and in both tracks there is that plane landing somewhere. For my ears it is difficult to recognize the different parts each artists plays. I actually don't know what sound is produced by Schmickler's computer and which comes from Lehn's synthesizer. And with this in mind, this is the closest to a classic 'duo' that you can get: the sounds heard on the album are the work of a good working partnership. It is a duo in which I do not hear not two separate 'nerds' with their 'toys'.
So, after all the challenge and doubt, just how does it feel to hear this album? Is it worth the effort?

First this blog and the people writing for it (and probably reading it) are always in search for new and unheard experiences. This was one for me or rather is still one, even though I've heard Schmickler live already. Second in all the abstract noise and sound I can hear or feel the cooperation of two likeminded musicians going to places they think are worth going to. It is a duo in the best sense. Third if you listen to it more than once you'll find structures and sounds that reoccur and they make you feel at home in that soundscape. Finally, last (but not least!!) I was captured by the sounds, by the unfamiliarity of this album. I enjoyed the journey with these two guys. I felt curiosity, unease but also relaxation in certain moments and started to look for more music from Schmickler and / or Lehn.

PS: Both tracks did undergo some editing and producing in June 2017. On youtube (link below) you can find the second track as it was presented live. I think I can hear the difference...