Part two of my guilty pleasure. There just may be a third on the way too, but not before I get to a few other items on my list. 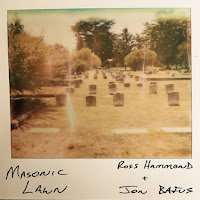 Typically when I am listening to an album for review, I am on the way somewhere, maybe to work, maybe to a concert, on a train, in a car, on the go, in the busy throes of life and work. However, when I finally got to guitarist Ross Hammond's duo record with percussionist Jon Bafus, it was early on New Years Day and I was taking a spatziergang in the German countryside. Long rolling hills, open fields, bare trees blowing in a gusty and sometimes rainy wind; however, with blue skies on the horizon, the first tune just felt like the perfect soundtrack to a new year. On 'Like Being Kissed by God Herself', Hammond's acoustic resonator guitar spills forth with purposeful motion, riding on Bafus's insistent yet feather light beat. It's like being swept along by music itself, open and chiming, hope and creation is woven deeply in its melodic simplicity and forthrightness. The next track, 'On the Incline', Hammond is on the electric guitar, a sound we haven't heard from for a while on record, several of his latest recordings have focused on the solo acoustic guitar. It's a good sound. Hammond prefers a slightly distorted sound and saturated in the type of Americana jazz-rock that takes cues from both Neil Young and Bill Frisell and makes it entirely his own thing. The track itself unfolds slowly, building vistas with care and patience. The title track begins with a dark blues riff from the open tuned lap steel guitar. Bafus's percussion is hypnotically repetitive, providing a groove for Hammond's evocative and slightly sinister melodic ideas.

Masonic Lawn, is a mesmerizing musical statement from the always searching Hammond. His focus on American folk and blues, and synthesis with improvisation and jazz elements has yielded musical treasures before, and it seems like he may have hit a mother-load here. A perfect soundtrack for a walk in the country and most likely, anywhere else. 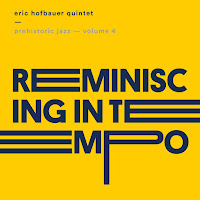 Boston based guitarist Eric Hofbauer has been on my radar for a bit of time now, his Prehistoric Jazz series - named after a Leonard Bernstein description of Stravinsky’s Le Sacre du printemps - has been an exploration of early 20th century modern classical composers such as Shostakovich, Webern, Ligeti and Machaut. On Volume 4, Reminiscing in Tempo, Hofbauer takes on the through composed piece that Duke Ellington wrote in honor of his mother. With his quintet of himself on guitar, Jerry Sabatini on trumpet, Todd Brunel on Bb clarinet & bass clarinet, Junko Fujiwara on cello and Curt Newton on drums, the guitarist shifts around the tonal arrangements and discovers parts of the piece that allow for improvisation and expansion doubling the length of the original song to 24 minutes.

The start of the song feels very traditional, almost reverential to the original, but listen closer and Hofbauer's clean clear acoustic guitar is doing something else. There are breaks in the cadence, and a later break down that may have you thinking of Derek Bailey, especially his late career take on standards. It's a musical jungle gym for the guitar fan, a close listening to Hofbauer's note choices and abstract connections to the song's structure is absolutely required listening. This short album is packed tight with ideas. Check out the other volumes as well! I ran into guitarist Rob Price a while back at the Stone in NYC. I cannot recall what the show was, but it was a guitarist ... maybe Frisell or Ribot ... either one would make perfect sense. Anyway, I had been a fan of his earlier works - 'At Sunset' and 'I Really Do Not See the Signal' - both smart and adventurous works with a crack quartet touching on many musical styles. I asked what he has been up to and he said he was working with a trio working out post-surf guitar takes on soundtrack themes, often playing the music set to film projections. Then, last year (2017) he released a special 100 copy run of an album from the trio, All Regions Player, which indeed sounds just like his description, a spaghetti western imbued set of tracks that draws on both Morricone and the Ventures. This is a really fun album, from the opening arrangement of 'Gunfight at the OK Corral' to the fantastic version of the theme from 'The Taking of Pelham 123' - the song reflecting the barreling of a runaway train in full blown jittery glory. 'Star Trek II: The Wrath of Khan' takes an approach that stretches the anthem way beyond its natural shape.

This set is certainly not free jazz, but it is full of imaginative arrangements of soundtrack music that has been molded into a highly enjoyable power trio fusing a love of film music and surf music. The trio is, in addition to Price, Ben Gallina on bass and Andy O’Neill on drums. Price is also long time figure in the Downtown New York City scene and is donating the proceeds of the album to support the Downtown Music Gallery. So, two great reasons to buy this CD: excellent and fun music, and supporting the beating heart of free music. (Check out the DMG event calendar, they have live music every week, including shows by Price). Buy here. 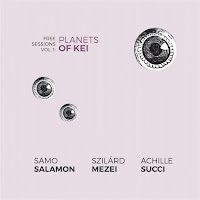 Before digging into Slovenian guitarist Samo Salamon's Planets of Kei, I did a little research on the blog. My colleagues Chris Haines and Conor Kurtz covered two different Salamon recordings of recent vintage and both similarly remarked on how the guitarist himself had the least amount of play-time on the recordings. On Free Sessions Vol 1: Planets of Kei this seems to be fully rectified. Salamon delivers a health dose of acoustic guitar on this album, in full free interplay with Szilard Mezei's viola and Achille Succi's bass clarinet and alto sax. The lack of drums and bass, and the use of only acoustic instruments, may seem to suggest a somewhat quiet album, and to some extent that is true, but it exhibits more than a few moments of fire and intensity that seems to be inspired by the sparseness of the instruments rather than held back by it. Right away on the opening track "Trio 1", the three are a-buzz, literally. From the rattle of the acoustic guitar stings, to the fizz of the bass clarinet, and the rub of violin strings, there is a crackling energy emanating from the group. To break things up, the next track is entitled 'Duo Achille & Samo', which is just that, the guitar and bass clarinet in a complex rhythmically interlocking dance. Salamon's lines grow longer and filled with chordal tones, while Achille plays elongated notes behind him. A later track 'Duo Samo & Slizard' begins in a similar fashion, but now with the guitar and viola. The two engage in a spirited melee, the viola often producing melodic lines spiraling out, while the guitar delivers staccato rhythmic figures. The track 'Trio VI', may be my favorite on the album. Starting with a repetitive finger picked figure on the guitar, the saxophone soon joins with an entropic melodic snippets. The free lines are quite interesting to follow, and the trio is adept at utilizing the spaces between their notes as much as the notes that they make, to propel themselves, especially in the final moments of this track where the friction between the three starts smoking.
Paul on Sunday, January 07, 2018
Share