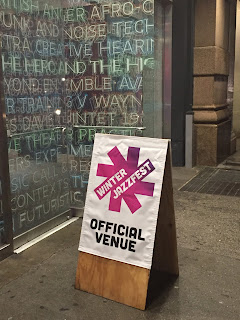 This year's 14th annual Winter Jazzfest - now a sprawling eight day affair featuring over 600 musicians - was themed "Social Justice Engagement," and indeed, there was a sense of urgency in the air. The message was carried by the musicians in projects like Marc Ribot's Songs of Resistance, captured in talks like "The Long March" with Archie Shepp, and encapsulated in many of the performances throughout the week.

I begin here with first 'marathon' night on Friday ... the festival had already been in progress since Wednesday, but the marathon nights on Friday and Saturday are the ones where something like 100 bands play at venues throughout the East and West Villages and some even further downtown. It's not easy to chart your path - some folks choose a single venue and stick to it, or like me, they careen wildly between as many as they can, hoping to catch all they can. I caught five shows, starting with Anna Webber's Simple Trio at a New School stage. Working off her complex charts, the saxophonist/composer, along with pianist Matt Mitchell, and drummer John Hollenbeck delivered a brilliant and energizing open set.

Next, I wandered over to The Bitter End for Gard Nilssen's Acoustic Unity. The trio from Norway, with a recent devastatingly good triple live CD on Clean Feed, demonstrated what makes them so devastatingly good: a deep connection with classic free jazz and the technical proficiency to take it several leaps beyond. Saxophonist André Roleighten playing is both melodic and fiery, drummer Nillsen leaves no musical space unattended to, and bassist Petter Eldh is a propulsive powerhouse, yet he proceeds with nuance and texture. It was a quick set, 45 minutes flew by without pause before I found myself trekking back up to the New School for Marc Ribot's Songs of Resistance.

The guitarist was fired up. In addition to his guitar and vocals, the band was James Brandon Lewis and Briggan Krause on saxophone, Domenica Fossati on vocals and flute, and Shahzad Ismaily on drums, who all served as critical support to the set of original and borrowed protest songs. The inspiration, Ribot explained, came from his participation in last year's Women's March in Washington. Tonight, his guitar playing took back seat as he mostly strummed a gorgeous antique Guild acoustic or tiny Raquinto. His cohorts made up for it, Lewis laid down often blues-tinged lines, and Krause filled in the spaces that Fossati left between her lush singing and moving flute work. Citing the recent politically motivated arrest by ICE of immigrant and activist Ravi Ragbir, Ribot launched into a tune that began as a lullaby but turned into an angry screed. An Italian resistance song was the piece de resistance of the set, after which a collective sigh from the audience followed. They closed with an original, 'Donny's No Good', for which Ismaily delivered a funky backbeat as Ribot's provided a lyrical psychological breakdown of the titular character.

Now charged up and ready to fight as well, I dropped by pianist Mara Rosenbloom's trio set in progress to cool off. With Sean Conly on bass and Chad Taylor on drums, Rosenbloom played a lyrical set. Steeped in a traditional jazz vernacular but pushing the edges, a palpable joy radiated from Rosenbloom, especially when she dug in and let the moment carry her.

My plan next was to head to the Lower East Side to catch Rudresh Mahanthappa's Indo-Pak Coalition, but weekend subway work proved to be insurmountable. I ended up at the nearby Zinc Bar instead and caught James Brandon Lewis' "Unruly Notes" set featuring trumpeter Jamie Branch. I will not complain, fate landed me at possibly the night's highlight show, as Lewis and Branch tore up the place with the punchy rhythm section of Warren Trae Crudup III (drums), Luke Stewart (bass), and Anthony Pirog (guitar). The first tune was a holy-Coltrane crescendo, Branch's trumpet cutting through and Lewis seeming like he could go on forever. But he didn't, Instead they slid into a complex syncopated groove. As the trumpet shot notes like a nail gun, it really felt like something was happening.

I missed the second day of the marathon, but I thoroughly interrogated several attendees, and I’m confident that it was another good night of music. I rejoined on Tuesday for Tyshawn Sorey and Nicole Mitchell at Le Poisson Rouge.

When I arrived, there was already a packed house for the aforementioned panel discussion, "The Long March," moderated by Ras Moshe Burnett, on the past, present, and future of the role of jazz in protest. Interestingly, the timing of festival overlapped both Martin Luther King Jr. Day and the disturbing report of Trump's "shithole countries" remarks, and the panel had a lot of ground to cover. Saxophonist Archie Shepp’s closing words are still reverberating in my ears: "Freedom is something that you must guard very closely ... I'm afraid today that we are losing ground."

While a bit of a heavy ending to a charged conversation, spirits were high for Sorey's solo set, which had been advertised as "a solo percussion and synthesizer set, in his own idiosyncratic display of sonic Zen koans, Dadist gestures, and master displays of intensity and restraint." The stage was dark and the focus was on the percussionist, as he began creating an atmosphere. Throughout the sometimes patience testing set, which was one evolving piece, there were many captivating moments, like for instance the hypnotically repeating, but never the same, glockenspiel melody as the start and end, and the minimalist piano passages underscored by occasional throbbing synthesizer.

Flutist and composer, Mitchell, who was the artist-in-residence for the festival, performing several times over the week, was this night leading her current Black Earth Ensemble octet. It was a great, wide-ranging performance, though marred a bit by tinny sound. Mitchell's Mandorla Awakening II: Emerging Worlds was one of 2017's more celebrated albums (it certainly figured highly on this blog's top 10’s) and her group, with outstanding musicians like violinist Mazz Swift, cellist Tomeka Reid, and vocalist avery r young, performed it with passion. Set in the fictional context of a utopian island within a planet beset by a warring, polluting, and dying civilization, the text asks questions of reconciling technology and nature. Though I didn't follow the narrative closely, I enjoyed the range of instruments and moments of searching leading to other moments of exhilaration.

While the festival was not an all-political event, as there were many concerts that made no mention of politics at all, politics was also just one of the festival's agendas. Another feature is the sheer amount and diversity of music to choose from, drawing both mainstream and progressive listeners together into an interweaving array of events. Among the other events, was a tribute to the late pianist Geri Allen and a concert with post-rock band Deerhoof with trumpeter Wadada Leo Smith. What I was able to attend was adventurous and ear-opening and but a small sliver of the Winter Jazzfest's program.