Six vocal artists, each explore this unique artistry in his own, highly creative and personal way, and all remind us how much the voice itself - naked, manipulated and processed - is still one of the most powerful means of musical expression. 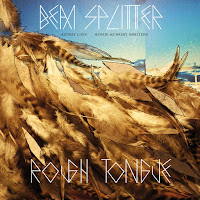 Beam Splitter is the duo of Chinese-American vocalist Audrey Chen, who also plays the cello and electronics in other projects, and Norwegian trombonist Henrik Munkeby Nørstebø. The duo began working in 2015 and has toured extensively since then on both sides of the Atlantic, often collaborating with other improvisers as vocal artist Phil Minton, electronics pioneer Bob Ostertag and trumpeter Lionel Kaplan. Tough Tongue, Beam Splitter’s debut album, was recorded live at the Viennese Rhiz club, at Caffeine Asperto in Ljubljana and in Berlin’s Weincafé, all during 2016. It is released in a limited-edition of 300 red vinyls plus download option.

Chen and Munkeby Nørstebø explores the spectrum between expressive, abstract vocals and the trombone as an instrument that channels pure bubbles of air and streams of breathes, intertwined in dense dialogues. Despite the abstract nature of Beam Splitter's aesthetics, Chen offers highly emotional and suggestive territories with her urgent, wordless lingo while Munkeby Nørstebø embraces gently her vocal forays with raw, tactile breathes, and serene drones. Both move organically, keeping a highly intimate, conversational mode, with their own senses of pulse and narrative development. The last, longest piece, “Sweet Nothings”, captured in Berlin’s Weincafé, introduces  rough elements of conflict and confrontation to Chen and Munkeby Nørstebø dialogues. These elements add a deeper, vulnerable dimension to Beam Splitter's intimate mode of sonic relationship. This 22-minutes piece concludes with newer, sweeter and compassionate understanding between these unique individuals. 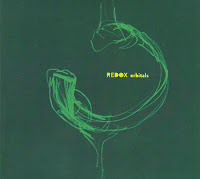 Redox is the trio of Austrian, Graz-based vocal artist and electronics player Annette Giesriegl, pianist Katharina Klement and Croatian, and Brussels-based marimba player Kaja Farszky. All are performers of contemporary music as well as bold improvisers. Redox was formed in 2014 and Orbitals is its debut album,  recorded live in the Austrian town of Kumberg and in Croatia’s capital Zagreb in 2015 and 2016.

The term Redox - reduction-oxidation - refers to the process of transfer of electrons between two bodies, and redox reactions are used to power smartphones, laptops etc. Orbitals is the mathematical description of the wave-like behavior of electrons in atom. These elaborate, scientific terms do capture the essence of this trio. Redox operates in a busy, very vivid process of sharing, sculpting and charging voices and sounds with shifting elements of expressiveness, energy and momentum. The trio employs a wide arsenal of sounds - acoustic ones, extended ones with different vocal and breathing techniques as well as assorted piano and marimba preparations, and subtle electronics. Giesriegl, Klement and Farszky exchange roles constantly, each one intensifying the tension, the fragile pulse and narrative in her own distinct, eccentric manner. The nuanced and mysterious textures are developed in a methodical manner, insisting on an uncompromising investigation and experimentation with timbres and dynamics, with almost no attempt to suggest emotional release. 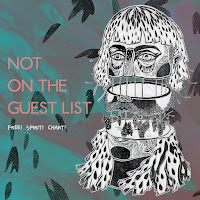 Not On The Guest List consists of the Norwegian, Copenhagen-based drummer-percussionist Ole Mofjell and vocalist Natalie Sandtorv, a couple also in real life. Sandtorv is also an accomplished singer-songwriter who released recently the acclaimed album Freedom Nation (Øra Fonogram, 2017) and Mofjell is in-demand drummer who has collaborated with pianist Jacob Anderskov and sax players Tobias Delius, Anna Högberg and Aram Shelton.

Sandtorv uses her voice as an ecstatic, even hysterical instrument, sometimes dueling, often dancing passionately with the propulsive, schizophrenic drumming of Mofjell. Their deep, immediate understanding and almost telepathic connection allows Not On The Guest List to move instantly, back and forth, between highly intense and powerful free-improvised outbursts to delicate and soft stream of improvised lyrics, while holding their tight and focused interplay. Obviously, and quite often, Sandtorv and Mofjell improvisations sound as restless emotional conversations of two opinionated soul-mates, but both manage to keep the tension and surprise with their urgent and colorful spectrum of sonic references. 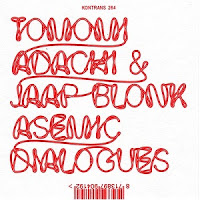 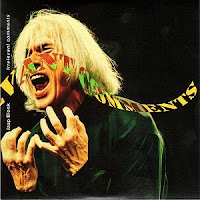 Dutch vocal artist-sound poet-electronics player Jaap Blonk needs no introduction. Here he performs with lost twin, Japanese vocal artist Tomomi Adachi, who like Blonk, has performed contemporary works, collaborated with numerous improvisers, among them Akira Sakata, Otomo Yoshihide and Jon Rose, and adds electronics to his unique palette of vocal sounds. Blonk and Adachi performed together few times in the past but Asemic Dialogues is the first document of their work, capturing their live performances at Berlin’s Lettrétage on July 2017.

The title of this album says it all. No words or semantics are needed, but tons of verbal-emotional information is exchanged. These eccentric, restless twins dive immediately, head-on into noisy conversations that sound as secret, fragmented transmissions of two out-of-tune-aliens with extremely short spans of attention. These terrestrial creatures are clearly deeply in love, demonstrating great affinity for Dadaist vocal games and primitive techno beats. The second dialogue is even wilder than the first one and it seems that the beloved and adventurous vocal explorers were lost somewhere in deep, noisy space. These irresponsible anarchists show no sign of interest in return to mother Earth.

The ones who are still novice in the art of Blonk may want to check his Irrelevant Comments, a sort of overview of all the things that Blonk can do: Musique concrète, beats, sound poetry, minimalist techno, horrific soundscapes and even weirder stuff. 16 pieces, dating from 1996 to 2016, recorded at Blonk’s home at Arnhem, Netherlands. 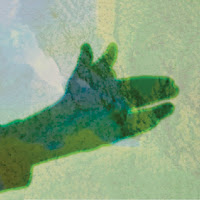 Camo is the debut EP release of Native Instrument. The four fascinating pieces entwine organically the natural voices with precise and subtle vocals and electronics layers. It doesn't take long before you begin to visualize the dances of frogs on acid, sweating in some steamy tropical ambience, jumping recklessly along some bug beats or experiencing the amphibian trance. Highly intoxicating stuff.