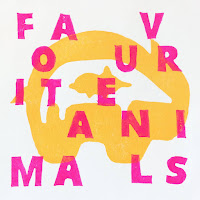 I’ve mentioned this before, reviewing previous releases from Cath Roberts’s quintet Sloth Racket and Ripsaw Catfish, her duo with Anton Hunter, but it’s worth pointing again to the communal ethos at the foundation of Luminous Label and its related projects. Recorded in August, crowdfunded in the fall, and released by end of year, Favourite Animals is an excellent example of this family of creative musicians embracing the DIY ethos from punk’s heyday. This carries through from players appearing in supporting roles on each other’s albums to things like a shared aesthetic for album art (Luminious and Raw Tonk covers look especially great together).

By the numbers, Favourite Animals is Sloth Racket times two: a five-piece horn section (featuring Dee Byrne on alto, Julie Kjær and Tom Ward on bass clarinet and flute, Graham South on trumpet, and Tullis Rennie on trombone) joins the core quintet (Roberts on baritone sax, Sam Andreae on tenor, Hunter on guitar, Bennett on bass, and Johnny Hunter on drums). There’s a richness to the horn-forward sound, and range of tones blends nicely on the big unison beats (see: the opening riff of “Confirm or Deny”). Roberts is adept at composing pieces that leave plenty of room for improvisation and interpretation. Mixing standard Western and graphic notation, Roberts is able to guide the players through the in/out melody of “Confirm or Deny,” which alternates clear melodic lines with improvised breaks. “Unspeakable” opens with Hunter, Bennett, and Hunter in a loosely defined trio. Gradually, the rest of the band rises out of the lush background for an improvisatory interpolation; but the spotlight stays on the rhythm section, which dominates, even with all seven horns blowing at once.

“Boiling Point” is a phenomenal showcase for the whole band and especially for Roberts, as composer and organizer/conductor. After about five minutes of free improvisation, the group coalesces around a blocky melodic line that counters some really wonderful flute and guitar solos. Roberts adds her solo voice late in the piece, alongside Rennie, and their bottom-heavy duetting creates the impression of a slight imbalance, although the group proceeds absolutely steadfast. Byrne’s alto periodically sails through, and South punctuates his restatement of the melody with his crisp tone.

The finale, “Shreds,” bursts out of the speakers, like a recapitulation of “Confirm or Deny,” with the full band firing away, until the direction shifts dramatically right around the middle. In a fantastic pivot, “Shreds” transforms into a moving, elegiac meditation, with Hunter’s almost shoegazey chords setting the stage for some excellent interplay. Andreae and South, particularly, take centerstage for a lovely duo improvisation. The group debut at the Lancaster Jazz Festival in 2016 resulted in a fine live album, but the performance and production here are amped up considerably. The finale is lush and heartfelt, resolving with something approaching optimism. Given how we’ve arrived at it, the ending feels both apt and promising.