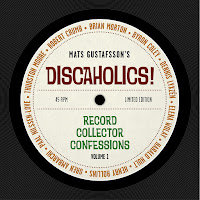 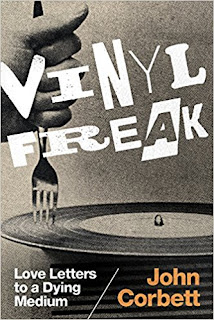 These two books deal with a common addiction, one that is most likely familiar to many of the Free Jazz Blog readers. This much-male-dominant, uncontrolled urge to collect musical artifacts in the shape of vinyls, far more and many than we may able to listen in our present lifetime. Swedish self-taught sax player-improviser-encyclopedic music archivist Mats Gustafsson and Chicagoan partner-in-crime critic-producer-promoter-Sun Ra archivist-gallery owner John Corbett focus on this passionate addiction, discaholism as Gustafsson coined it, or vinyl freak in Corbett’s lingo. Both by the way, need large basements in their homes for the tons of vinyl that they have accumulated.

Gustafsson’s debut book hit a far-reaching chord. Its first edition of 500 copies became instantly a collector item in its own right and a second edition is already in print right now and a second volume of Discaholics! is promised to be published later this year. His approach is somehow therapeutic. He interviews fellow comrades about their discaholic obsessions and how they deal with it in their waking hours, compare it to other passions (mainly sex), searches for salvation (“which record can save the world?”) and learns about other strategies of hunting down lost and rare items and arranging them.

Gustafsson describes himself as having an incurable discaholic condition, especially with first pressings. In an interview to his publisher, Norwegian noise-meister Lasse Marhaug, he says that he wanted to share “the experience,” and attempts to convince himself and his many followers that “it makes me a better person and a better artist. I need to be shaken up by what I discover.” Gustafsson even imagines his own viking burial in a coffin made of rare records.

His partners expand on the many surprising aspects of discaholism. Guitarist Thurston Moore tells about a Japanese record dealer in Osaka who can smell a record “and tell you which country it was pressed in,” confirms that John Coltrane’s Blue Train “is a good make-out record,” and concludes that discaholism can be cured “only by replacing it with sex, dope and heaven.” The Wire’s Scottish writer Brian Morton thinks that Coltrane’s Ascension and Peter Brötzmann’s Machine Gun have the same chance to save/not save the world. Australian drone guitar maestro Oren Ambarchi has amassed “approximately 34 meters of vinyls” already in 2013 and advises Gustafsson to check the “pretty goddam hot” cover of Annette Peacock’s Been in the Streets Too Long. Gustafsson's long-standing musical partner, drummer Paal Nilssen-Love, speaks also about other obsessions - high quality shoes and whiskey - and assures Gustafsson that Dutch reeds player Ab Baars has the best shoe aesthetics, that discaholics often have “pale skin colour, foul odour, with a desperate look in the face” and that the TRUTH is not within the grooves or in between but actually after. Gustafsson adds his own 25 TOP 10 lists of personal obsessions and a bonus: a one-sided 7” vinyl single using elements from Ambrachi, Nilssen-Love and Moore albums.

Gustafsson did not interview Corbett but Corbett mentions a few discaholic expeditions with Gustafsson, notes his great appreciation of Gustafsson’s extensive knowledge and admits that some of the most valuable and obscure items in his collection were handed to him by Gustafsson. Corbett's discaholism began as he was working at Co-op Records, when he got the debut Elvis Costello LP, hot off the shelves. “My first promotional copy. Like heroin - the first hit is free, the next one costs you your soul.”

Vinyl Freak is based on Corbett’s long-running DownBeat magazine column of the same name that ran between 2000 and 2012, updated with postscripts about vinyl that were reissued in the meantime on vinyl or discs. Corbett encyclopedic knowledge puts his own kind of vinyl freak/discaholism in a historic context and he never stops educating the reader in the many, varied histories of jazz, all over the globe.

Corbett's columns began with exploration of hidden gems - lost recordings of South-African jazz, a rare Coltrane recording, Cosmic Music, almost forgotten ones from drummers Milford Graves and Sunny Murray or of the defunct label of percussionists Paul Lovens and Paul Lytton, Po Torch. He adds a list of 113 rare LP’s from his own collection that were never reissued, all gems of experimental music and sound poetry. This spectacular list may convince even the most sane ones to sell all their belongings and begin to hunt these rarities.

Corbett shares his own obsessions: “real freaks know that Steve Lacy’s discography is one of the great challenges in jazz record collecting - acquiring all his LP's is like climbing the Kilimanjaro, and if you pile them up they might give the mountain a run for its money.” He also adds many anecdotes: “Dutch pianist Misha Mengelberg once told me that he thought high-energy free jazz was a music for seven-inch singles; it’s exciting, but it often goes on too long; better to hear it for a little while only, a few minutes at a time, like a single”. And offer insights: “For Anthony Braxton, the problem in mounting such projects (scores for different star systems and galaxies) is always material, never creative - give him the means, and I have no doubt that he’s have intergalactic symphonic music happening tout de suite” or: “I remain perplexed at the number of at the number of key Cecil Taylor recordings commercially unavailable to the consuming public. Imagine if Joyce’s Ulysses or Pynchon’s Gravity’s Rainbow had been out of print for three decades”.

Corbett concludes: “So records are like any other lover. They bring out the best in you, making you a superior citizen, lighting your way, serving as life’s benchmark. And they make you into a moronic bore humping massive boxes from one place to the next. We are these two archetypes, we vinyl freaks, for better and for worse”.
Paul on Tuesday, February 27, 2018
Share

LPs by the ton, high-end shoes and Scotch...

So much for the fallacy of the starving artist?

not to mention that artists shouldn't be able to even afford their instruments in the first place, Anonymous!