The Aural Terrains label celebrates ten years of activity with several releases that affirms its mission of being “a creative space for exploratory contemporary music in its different manifestations” and “a platform for like-minded composers-musicians who navigate the different aural terrains and depths of sound with vigilance and integrity.” 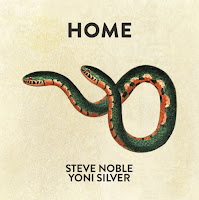 When Israeli bass clarinet player Yoni Silver relocated to London he began meeting with drummer Steve Noble for weekly sessions that lasted about two years and led to the recording of Home. The album was recorded during two session on April and July 2016 and is dedicated to Silver's newborn son Alexander Silver Schendar. Both Noble and Silver are clever and inventive improvisers, informed by free jazz but not committing themselves to any form or convention. Noble has played with innovative improvisers such as Derek Bailey, Wadada Leo Smith, Evan Parker, Thurston Moore, and Joe McPhee. Silver plays in the Hyperion Ensemble of Romanian composers Iancu Dumitrescu and Ana Maria Avram, played with German trumpeter Birgit Ulher, recorded with Israeli metal-circus-core band Midnight Peacocks, and with composer Dganit Elyakim. Silver has developed a unique technique for the bass clarinet - instrumental prosthetics - that enables him to expand the woodwind sonic palette into the realm of electronics and noise.

The first two pieces begin as quiet rituals, almost meditative, with super-precise and hyper-detailed search of common resonating, buzzing and sustained sounds. Patiently, Noble and Silver expand and deepen their sonic palette, transforming the ritualistic interplay into an intense, tense and dense texture. The third and fourth pieces extend this quiet approach with an unsettling dynamics, still totally attentive and exploratory, but with a conflictual spirit, allowing their reserved sonic storms to intrude and clash with each other Noble and Silver conclude this sonic meditation with a full return to the to the ritualistic mode that opened this recording. But like the Zen Buddhist circle, Ensō, the return only symbolize the beauty of the transient, imperfect spirit of the moment. 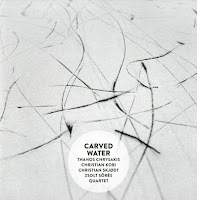 The two pieces offer two different strategies of sound artistry. The first one, 39-minutes long, sketches peaceful, abstract textures where the weird, sparse sounds flow and and drift in a clear and quiet - almost ethereal- stream. The four musicians steer and carve this delicate, liquid kind of interplay in an economic manner but surprisingly sketch a rich and detailed texture. There are occasional, sudden outbursts of tense interplay but none lasts for long before the quartet resumes the emphatic, contemplative commotion. The second shorter piece, 12-minutes long, is more dynamic, intense and stormy. The quartet creates continuous noisy waves that keep spreading all over the space, almost tangible with its raw, disturbing substances. 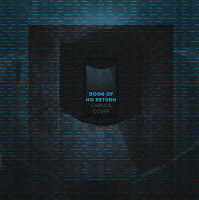 Spanish double bass player Carlos Costa says that for a long time he was fascinated by the image of a 'Door of No Return', a symbolic title that captures the essence of his uncompromising, free-improvised solo art. A title that radiates his strong commitment, pushing through this imaginary door towards the unknown, towards freedom, and never going back. Being at the here and now and becoming “an instrument of pure sounds, harmonies of pain, rhythms of new times, melody of contemplation... chaos and harmony.”

Door of No Return is Costa's debut solo double bass album, recorded on April 2015. Costa's technique is informed by the innovative work of French classical double bass player Alain Bourguignon and American free-improvisers like Mark Dresser and Mark Helias. Each of the ten “Door”s investigates, in a highly disciplined, almost scientific manner, a certain aspect of the bull fiddle timbral spectrum - extended bowing technique, including using the bow or bows on the wooden body of the bass as a percussive instrument, resonating overtones, different kinds of harmonics, multiphonics and other weird sounds and noises. Costa plays the double bass as an observant explorer who maps meticulously uncharted, almost alien-sounding territories. His profound knowledge and understanding of the physical anatomy of the double bass as well as his sense of invention and searching spirit are highly impressive. 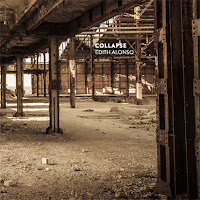 Spanish composer and sound artist Edith Alonso's career has encompassed many fields. She began playing classical music on the piano but soon grew interested in the guitar and saxophone and explored jazz and rock. In the early nineties she played the electric bass in a local punk-rock band. Later she studied electroacoustic and instrumental composition in Paris and discovered musique concrete with composers François Bayle and Pierre Henry. She composed music for many multidisciplinary formats - live poetry, audio-visual, dance and theater projects, improvised in a duo and trio outfits and composed music for "Docuficción en vivo" (documentary fiction - live) about the International Brigades in Aragon (during the Spanish Civil War).

Collapse is a four-part composition for prepared electric bass, recorded in May 2014, edited and mastered by Alonso a year later. Alonso transform the electric bass to an otherworldly sonic generator. She keeps producing from the prepared and mutated string instrument more and more bubbling layers of raw, industrial sounds until any conception of the electric bass spectrum completely collapses and drowns in this dense swamp. This demanding journey open with the aggressive “Collapse I”. “Collapse II” caress a distant pulse in its foray into alien-sounding terrains. “Collapse III” is more suggestive with its sinister, cinematic quality. The final “Collapse IV” mixes the distorted, processed metallic bass sound into an intense, fiery stew that threatens to erupt and melt anything on its course.