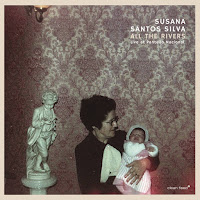 This CD is a 42-minute duet between the trumpeter Susana Santos Silva and the Portuguese National Pantheon. Santos Silva is becoming increasingly well-known in free jazz and free improvisation circles, whether through her membership in the group Lama or a host of other projects made in groupings across Europe. For those who have not visited Portugal, the Panteão Nacional may be unfamiliar.

The phrase “obras de Santa Engrácia,” the construction of Santa Engrácia, is an expression in Portuguese that denotes a building project that will go on forever. The source of the phrase is Lisbon’s Church of Santa Engrácia, yes, the Panteão Nacional, located in the city’s ancient Alfama district and overlooking the Tagus River. Endless? The church’s state of incompletion was a constant through centuries of change, a symbol of upheaval. Construction of the first church dedicated to Saint Engrácia on the site began in 1568. The present church began in 1681 after previous ones on the site had collapsed. Construction proceeded for thirty years, until the building was abandoned by King Joao V, distracted by far more ambitious construction projects—an aqueduct, palaces, a cathedral, an opera house.

It was finally finished in the 20th century. In 1916, six years after the fall of the Portuguese monarchy and the launch of the First Republic, it was repurposed as a National Pantheon, a tomb for the country’s greatest figures. It was finally completed in 1966, forty years after the fall of the first Republic, four years before the death of the dictator António Salazar and eight years before the Carnation Revolution turned Portugal into a modern democracy (the “obras” and the construction dates come from the Wikipedia entry).

In recent years the profoundly resonant space—high, thick, dense stone walls; an almost circular space; a dome--has become the occasional site for concerts of a highly contemporary sort. The Variable Geometry Orchestra, a large-scale assembly of free improvisers led by Ernesto Rodrigues, has played there, and the guitarist Abdul Môimeme has recorded a fascinating solo concert there, Exosphere on Creative Sources (full disclosure: I wrote the liner note). The appeal of the space is immediate: it offers something like a 20-second time lag, making it an extraordinary medium for sustained pieces and the exploration of sonic decay.

Here, Santos Silva is literally playing the Pantheon with her trumpet, tin whistle and bells. The Pantheon takes her sounds and magnifies them, playing them back to her, extending them. When she plays succeeding tones a semitone apart, the echoes explode around her. When she (apparently) aims her trumpet in a different direction—sound (overtones), amplitude—change markedly. It would be remarkable if Santos Silva merely explored the sound of the space, its shifting echoes and durations, but she does far more. She creates a profound, subtly evolving work that engages the possibilities of the trumpet and the building as if they were paired, like the two resonators on a veena.

The music is open, the Pantheon is open, and you are invited to hear it any way you can or wish. Some selective thoughts:

At times Santos Silva will throw out a great burred, brassy blast; in contemporary terms, these are multiphonics; in architectural terms, they’re challenges to the Pantheon’s walls to respond in qualitative kind; in jazz history, these are almost rude noises, or maybe even more “dinosaur in the morning” than the sound of Coleman Hawkins thus described by the critic Whitney Balliett, in one documentary it is presented as the sound of the unrecorded Buddy Bolden. These signs point to the status of this concert as a kind of originary moment, intimately connected with multiple histories;

The Panteão Nacional has been almost exclusively a male residence. The first woman to be interred there was the great Fado singer Amália Rodrigues, in 2001. It is perfectly appropriate that a woman should make such a profound statement as All the Rivers at this site;

While the Panteão Nacional is an imposing, even intimidating space (an elevator ride to the terrace for a view of the Tagus involves squeezing into a confined space cut into one of the incredibly thick walls: the claustrophobia suggests “immurement”—to be entombed in a wall;

The CD jacket offers no images of the Pantheon, no suggestion of the power, the grandeur, the solidity, that distance that grows as you get closer. The cover of All the Rivers could not be more opposite: Santos Silva dedicates the CD to her grandparents; the front cover photograph, uncredited, presents an older woman holding an infant; pink wallpaper with an abstract arabesque suggests floral bouquets; in the photograph there is a statue on a pedestal of a boy in formal dress, perhaps from the eighteenth century, reading a book. These are intimate emblems, a personal history, a history as unlike as possible the history to which the Pantheon speaks; a history of the intimate and familial versus the history of church as state (resonating with Jose Saramago’s Memorial do Convento  [in English, Baltasar and Blimunda]);

Santos Silva’s performance in the Pantheon is a rich meditation on the nature of time, its expanse, its mystery and its construction in the moment, the necessary relationship between works and breath. If the Pantheon would seem to enclose time, to celebrate a permanence, Santos Silva opens it in a matter of 42 minutes. The strange history of the “obras,” that construction that ebbs and stops with the passage of centuries and the convulsions of politics, is scaled to the performance, the power of the transitory to find form that is lost to a stone monument.

Are time and timelessness different or the same? Is one the route to the other? Which one? Santos Silva and the Pantheon meet on the path of time’s riddle, a mobius strip. We are left blessed with these long tones, these multiphonics, these reverberant bells, these ceremonies of memory, exploration, freedom and reconciliation.