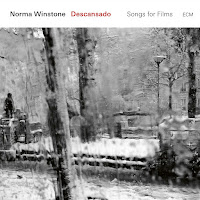 Norma Winstone is a vocalist in a serious relationship with instrumental music. She learned to read and started playing piano as a kid. After becoming a staple in the London pub scene, known for her remarkable control and her pure, horn-like tone, she got called to sit in with pianist and composer Michael Garrick’s group on a gig. After they played through the songs she’d learned, he asked her to stay up with the band for a few more tunes and take over the recently departed saxophonist’s role. She agreed and looked at his parts - no lyrics, some written melodies but often endless droning on a single chord. She mustered up her reading chops and improvised, using the wordless, vowel-based style of vocalisation for which she’d become known.

Over the next four decades, she went on to release over a dozen solo records and collaborate, composing vocal lines, writing lyrics to instrumental melodies, and improvising, with Garrick’s sextet, Kenny Wheeler, Ian Carr’s group Nucleus, saxophonist Joe Harriott, and many other prominent players in the British free jazz scene.

Descansado, Winstone’s latest record, is a collection of mostly instrumental music from films, featuring songs from the works of Godard, Scorcese, Wenders, Fellini, and more. Winstone’s voice is ageless, still the same unwavering and remarkably controlled, instrument-esque voice from 1970. The band features Winstone’s regular trio-mates, pianist Glauco Venier and multi-reedist Klaus Gesing, plus guest percussionist Helge Andreas Narbakken and guest violoncellist Mario Brunello, and they sound lovely. Moments of sparseness, almost contemporary-classical-esque, are the group’s best. Her instrument still sounds its most fresh and exciting in a more open, free arrangement. “Amarcord,” from Fellini’s film of the same title, is a beautiful, misty manifestation of this. Dreamlike, spiraling piano plays the wistful, nostalgic merry-go-round melody before dying to give way to the voice’s sorrowful dance with the heavy counterpoint of the bass clarinet and the haunting sound of hollow percussion across the cymbals. The piano returns only at the very end with the original melody.

The highlight of Descansado is Winstone’s lyrics, which she wrote for all but two songs on the record. Vocalese, putting lyrics to instrumental melodies, is a delicate art. It can go wildly well or wildly wrong. Examples range from poetry (Joni does Mingus’ “Pork Pie Hat:” “I'm waiting/ For the keeper to release me/ Debating this sentence/ Biding my time/ In memories/ Of old friends of mine”) to drivel (Lambert, Hendricks, and Ross do Miles’ “Four:” “Of the wonderful things that you get outta life, there are four/ And they may not be many, but nobody needs any more.”) Winstone’s lyrics are poetry, thankfully, and they really elevate the entire record.

“Touch Her Soft Lips and Part,” from Laurence Olivier’s Henry V, stands out.

There is a mournful yet restrained and plaintive quality to her writing that beautifully reflects her instrument:

On the brow of the hill
As she sees him depart
No more sun in her sky
No more joy in her heart
All of his magic
Still lives in her mind
All the sounds and the images
Slowly rewind
And he’s out there somewhere
Skies grow dark, suns eclipse
She remembers his voice
And the touch of his lips
“Maybe in time,” as he touched her soft lips

This piece is especially moving when considering the record is dedicated “To John and Kenny,” presumably Winstone’s late husband, John Taylor, and longtime friend and collaborator, Kenny Wheeler, who passed away within one year of each other, 2014 and 2015, respectively. Descansado is a fitting tribute. The word means “rested” or “refreshed,” and that’s exactly how Winstone sounds.

John Taylor was Norma Winstone's ex-husband (what is 'last husband' supposed to mean?). Norma Winstone, John Taylor and Kenny Wheeler performed and recorded together as Azimuth, and the identities of the dedicatees of this release are blindingly obvious to most British jazz listeners (no 'presumably' about it!).