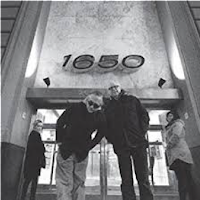 Located at 1619 Broadway in the heart of Manhattan, the Brill Building was the center of professionally written pop music in the 1950s and early ’60s. It represented a specially designed division of work in which songwriters, producers and artists-and-repertoire staff cooperated to match artists with appropriate songs - it was a classic hit factory, a brand. The flagship company of Brill Building pop music (actually located across the street at 1650 Broadway) was Aldon Music, founded by Al Nevins and Don Kirshner. The most famous Brill Building songwriting teams were Gerry Goffin/Carole King, Jerry Leiber/Mark Stoller, Barry Man/Cynthia Weil, and Doc Pomus/Mort Shuman, other contributors were Gene Pitney, Bobby Darin, Paul Simon, Neil Diamond and Neil Sedaka. Brill Building focused on teen pop hits, which is why they were especially successful with girl/boy groups: The Shirelles, The Ronettes, the Monkees or the Everly Brothers were regular customers. Up to today the era stands for some of the most famous songs of the American songbook.

In 2012 Kramer, a legendary alternative rock/pop musician (of Bongwater and Shockabilly fame), composer, producer and founder of the Shimmy Disc label, recorded some of the smash hits of that time for The Brill Building (Tzadik). Among others there are beautifully weird versions of “Do Wah Diddy Diddy“, sounding like Captain Beefheart teaming up with Devo, or “Spanish Harlem“, which he transformed into a country song reminding me of Johnny Cash’s Tennessee Two with Nick Cave as a frontman. Kramer delivers these songs in his typical loopy, angular off-the-wall style and he wasn’t the old sound wizard if he hadn’t integrated found-sound dialogue snippets between the songs dealing with pivotal incidents of 1960s US history like President Kennedy's assassination, race riots, and the Vietnam War symbolizing the end of the cultural era the Brill Building represented.

For The Brill Building, Book Two Kramer is joined by guitarist and American songbook specialist Bill Frisell and the result is a completely different one. Again the album offers ten selected cuts from the golden age of assembly line pop, but this time the songs are much more accessible - mainly due to Frisell’s brilliant and distinctive guitar work. Kramer, who is responsible for all the other instruments except Frisell’s guitar, coats the songs with his artificial, amateurish, hazy, blurred, slow motion sound, which matches excellently with Frisell’s quivering, oscillating style. The results are surprising and sometimes really wonderful. There are spectral versions of Paul Simon’s “America“ and Neil Diamond’s “Solitary Man“, the first one so timid and tender that the notes seem to vanish into thin air, the latter swinging between deep melancholy and gloomy film noir soundtracks. Other favorites are Jack Nitzsche’s and Sonny Bono’s “Needles and Pins“, here an enchanted wonderland of distorted vocals, Fender Rhodes, drum computer and guitar, and “Kicks“ (by Barry Mann/Cynthia Weil). The Kramer version is the best song Tom Waits has never recorded. But not all songs are such persuasive. The Monkees’ “The Porpoise Song“ (written by Gerry Goffin and Carole King) lacks the Beatles-psychedelia of the original, and Bert Bern’s “Here Comes the Night“ is better off with Van Morrison’s sharp, soulful voice.

Many of the songs are about love-sickness, loneliness, loss and how to deal with it. However, while the originals were often from a young people’s perspective, Kramer’s view is the one of an aged man, he sings the songs with a broken voice. Separation is more bitter, loneliness feels colder, disappointment hits you harder.

Of course, this is rather a pop album that hardly fits to the music we usually review. The connecting point is Kramer’s relation to John Zorn’s Tzadik label and of course Bill Frisell. If you like his All We Are Saying collection of Beatles songs, John Zorn’s The Dreamers albums or bands like Animal Collective, you might be right here.

The Brill Building, Book Two is available as a CD, available at Downtowmmusicgallery.com