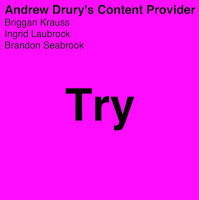 In the sophomore album by Andrew Drury's Content provider, Try, the drummer continues his habit of being involved in quality experimental jazz. Drury, who handles all of the compositions, is joined by musicians who are also mainstays in the New York avant-garde music scene: Ingrid Laubrock (tenor and soprano saxophones, autoharp), Briggan Krauss (alto saxophone, guitar) and Brandon Seabrook (guitar). Though Content Provider can be quite abrasive, and thrives in that energy, the record also has very well played atmospheric moments. This is notable on "Cassandra", the sole track that features Krauss on guitar.

"Cassandra" is the only non-composed number of Try. Both guitars are key to the eerie atmosphere of the improvisation, Seabrook providing ominous tremolos and chords and Krauss sliding through warped waves of sound. This, plus Drury's subtle, often cymbal focused approach works wonderfully with Laubrock's long and solemn sax lines, making "Cassandra" a highlight of the record.

"Diving Into the Wreck", is another standout, but unlike "Cassandra", the track begins with intensity. The end of long, rising alto saxophone lines are met with explosions of energy from the rest of the band before Drury's powerful drumming pushes the quartet into a strong storm of instrumentation. The tenor saxophone is particularly impressive - Laubrock's ferocious soloing is a great match for Seabrook's erratic style of comping.

The Seabrook and Laubrock combination is effective again on "I'm Doing My Job. Are You Doing Yours?." The track begins with a couple minutes of a surprisingly catchy groove that forms the basis for quick spurts of improvisation from Drury's bandmates, Krauss being in top form here. The second half of the tune features a skillful conversation between tenor sax and guitar that ranges from rigid and harsh to light and spacious. As Laubrock's sax softens, Seabrook switches his guitar from its usual forceful attack to an uncharacteristically airy tone.


Throughout the album, it's clear that Drury has provided another solid example of his talent as a drummer, composer and bandleader. Those who have the privilege of seeing Content Provider live are in for a good show.

*Note: there will be release show on April 13th at the Sound It Out series at Greenwich House in New York City.