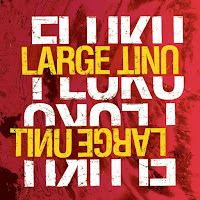 Actually, the Large Unit is a band you have to see live. At the beginning of March they were in Schorndorf, in the Manufaktur, one of my favorite venues. I set forth early to secure a seat in the front row, precisely in the middle, right in front of the horn section and the guitar amplifier, exactly between the two drum kits. In one word: In the eye of the hurricane.


I’ve seen them live before and they’ve always knocked me out, which is why I’ve purchased all their albums: the Erta Ale box set, 2015, Ana, the EPs Rio Fun and First Blow, the compilation Selected Tracks as well. Even on CD/LP you can feel their intensity, their unpredictability, their outstanding soloing, and how they deal with silence. It’s the experience of something primeval, a force of nature, something that resonates in your guts. The Large Unit is about immediacy and purity, they’re like the ugly twin of comparatively high-gloss large ensembles like Fire! Orchestra or the London Jazz Composer’s Orchestra (I don’t mean that in a negative way). The music reminds me of very early recordings of Peter Brötzmann’s Chicago Tentet, when they used to work with preconceived material (like on 1/2/3, their 1998 release on Okka Disc, for example).

Compared to its predecessor Ana, which incorporated an expanded line-up of Brazilian musicians, Fluku, Large Unit’s latest album, finds the band reduced to a 12-member core. Of course, the recording cannot quite reflect the captivating atmosphere of a show (although it was recorded live at Victoria Nasjonal Jazzscene in Oslo), but it gives you more than just a glimpse of what the band is capable of. Like on their other albums, the Large Unit interlaces tutti riffs with free, blurred and smudgy solo passages, guaranteeing the soloists a lot of freedom by a minimum of organization, which leads to maximum effectiveness.

The title track serves as a perfect example here. It’s a 25-minute monster, from which numerous concertinos are culled. The heads cleanse the ear of the listener for the bustling and complex small ensembles battles (duos, trio, quartets) and sharpen the attention for the improvisational intelligence, the organization of freedom in the music, its brilliance and sensibility. The track begins with a typical Large Unit fanfare-like riff, contrasted by sizzling electronics, white guitar noise, and ruthless drumming. Then the first part just ebbs away and opens the door for one of these reed discussions mentioned above. With the attack of the drums the band stumbles back to the next riff making room for a solo by Mats Äleklint, one of the most intriguing moments on the album. A drum solo heralds the last part, a silent passage, which enables the piece to breathe. The sound here is translucent and quiet, drawing on the power of a chamber aesthetic rather than on unleashed emotionality, mainly when Ketil Gutvik’s guitar crawls in, rounding the piece out with reminiscences of the late great Sonny Sharrock.

Fluku is a superb album, dynamic, adventurous, colorful and innovative. If you have the chance to see the band live, don’t miss it.

Fluku  is available on Bandcamp:

Watch an extract of “Fluku“ live: