Outer space has been an inspiration for many artists and musicians. For some it gives a cosmic unity and the need for a universal spirituality, for others it offers an exploration into the nature of nature itself, with its paradoxes, infinite un-understandability and sense of wonder. And then you have the ones who see in outer space nothing but violent energy, erupting solar flares, exploding stars and all-consuming black holes.

Two such albums are reviewed here. 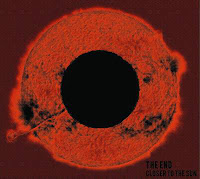 The first one is by the French power trio Fabien Duscombs on drums, Heddy Boubaker on bass and Mathieu Werchowski on violin. Needless to say that the bass and the violin are linked to amps and pedals. The first track is still a kind introduction to the rest of the album. It's repetitive and with a reasonable level of noise, which changes with the twenty-seven minute long second track, which draws you into an incredibly violent piece of music, relentlessly, repetitively in a kind of psychedelic nightmare of increasing volume, distortion and power, alternated with a quiet moment of feedback and tiny quantum particles of sound flying about, but rest assured (or not!) but the violence and the volume return in full force, as the band ventures deeper and deeper into the blackness of the universe. And so it goes with the last track: slow start, explorative sounds, until gradually all hell breaks loose again, with heavy punk-like rhythms and heavily distorted violin.

This will surely not be to everybody's taste, and I wonder how many people stayed in the audience of this live performance, but the ones who did, definitely got their money's worth. This is not for everyday consumption, yet I can only admire the drive and the power behind it. 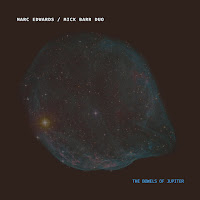 The second space travel brings us to Jupiter, and is performed by Marc Edwards on drums and Mick Barr on guitar. Edwards, known from his own quartets and trios, from Slipstream Time Travel, and from his collaborations with Sabir Mateen, David S. Ware, Paul Flaherty and many more, is a great jazz drummer, seemingly more than happy here to become more hard-hitting.

Mick Barr on the other hand, is a heavy metal guitarist (sorry for the dumb description - I'm sure there's some more sophisticated name for his brand of metal), known from bands such as Crom-Tech and Orthrelm, or under his other moniker Octis or Ocrilim. The only other 'jazz' album that he's performed on is on the album "I Don't Hear Nothin' But The Blues, Vol. 2, Appalachian Haze" in a trio with Jon Irabagon and Mike Pride (on which a lot can be heard except the blues).

This duo is also high energy, full power, with a no-holds-barred and take-no-prisoners approach. The speed and the sheer intensity of both drumming and guitar are so fascinating that you really feel propulsed through the universe, and the only thing you hope is that you don't encounter a comet on your path. Luckily, some of the tracks offer some respite, a welcome break. There is also a tongue-in-cheek title with "Deep Space African Drums", on which Edwards sets the tone with some wonderful drumming over which Barr slowly improvises a chordal arrangement, yet the next "Solar Flares" brings us back to the incedible force of both drummer and guitarist to go beyond the normal. Just listening to it is exhausting, let alone perform it.

Like the other album reviewed here, it's hard to call this jazz, unless maybe in its original definition of "energy" in the positive defintion or "noise" as understood by its critics.

And again, you can only admire the total lack of compromise, the willingness to go to the extreme and keep going for it, with no afterthoughts or hesitations.