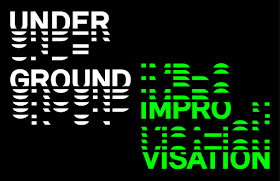 
Last year, the Haus der Kunst in Munich presented FMP: The Living Music, an exhibition detailing the work of the renowned German record label from its establishment in the late 1960's to its end in 2010. The imposing three room floor of the building was filled with posters, videos, display cases of letters, record covers, the famous Cecil Taylor box set and much more. In addition, there were two nights of music from artists with strong FMP connections, like Peter Brötzmann and Alexander von Schlippenbach. This spring, the Akademie der Kunst in Berlin has reprised the exhibit with a slightly annotated and updated version and with a corresponding concert series.

In Munich, one room, off to the far side of the galley was covered with covers of every one of the FMP and related LP covers that were released, along with iPad listening stations offering a huge portion of the discography now available through Destination-Out. In Berlin, this has been converted to the central theme of the exhibit. Working with essentially a giant exhibition hall that doubles as the concert venue, a temporary half-wall serves as the division between the live music and the living history. Display cases showcase the special albums like the aforementioned Taylor box set, the Workshop Freie set from 1978, musical collaborations with musicians from the DDR, women musicians, and more. Listening stations are incorporated throughout the exhibit as well as video stations (with too short headphone cables sometimes). Some new video material has been added since the Munich show as well.

The exhibition can easily suck away a couple of hours, and in an adjoining gallery, another exhibit (which was not a part of the Munich show) show cases improvisation and underground culture behind the Iron Curtain, from the late 60s to the early 90s. Music, video and a wonderful collection of ad-hoc musical instruments improvised out of the meager means and materials available under Communist rule are displayed in full glory, with plenty of context given to their creation. One does get that the art of this time is highly yoked to the conditions under which it was made, but it also serves as good companion to the music and history of FMP, which celebrated freedom and experimentation and helped to bridge musicians in East and West Germany.

In his review of the Munich exhibit and concerts, my colleague Martin Schray provided some foreshadowing: "when the exhibition will be presented in Berlin next year, there are rumors of a larger festival (maybe three days) and at the old homestead the spirit might be even more alive than in Munich." Well, as it happens, there is actually three months worth of programming being held at the Akademie der Kunst, albeit with more of a set agenda than the workshop format that Martin described. The festivities kicked off on Wednesday March 14th with an introduction with the event curators, Jeanine Meerapfel, Markus Müller, and Jarosław Suchan. Attendees of the talk were then led up the stairs into the expansive exhibit rooms upstairs, the same hall where the famous Workshop Freie meetings had been held.

Following a brief introduction by concert organizer Louis Rastig, accordionist Rüdiger Carl and percussionist Sven-Åke Johansson, both with deep ties to the label, took to the stage for a brief opening set. The music was quiet, the accordionist sticking to hushed phrases and percussionist applying a soft touch with brushes and mint green soap dishes to his assortment of cymbals and corrugated cardboard instruments. The duo played with lite melodic and rhythmic notions, utilizing the total sound - a foot tap or the irritating scrape of plastic against metal was as important as a flurry of intentional melodic phrases. The intro was followed by a break and then a solo drum show by Vladimir Tarasov. His set was captivating arc of improvisation by Tarasov who was immersed in the middle of a drum set replete with timpani and a giant gong. My one complaint is that the show was started a half hour early! We had been obliviously munching and enjoying a drink while Tarasov had already been playing.

We couldn't make it on Thursday, but Friday night's concert began with a duo very much the opposite of Wednesday. Where Carl and Sven-Aki Johannson were delicate (mostly) and quiet, guitarist Olaf Rupp and drummer Michael Wertmüller were ablaze from the first crash of the drum and electric crackle of guitar. Carried along by Wertmüller's pulsating set work, Rupp threw shards of chords and sonic blasts out to the audience. The duo's music was textural, noisy but not noise, and it advanced with a certain internal logic. Wertmüller is a heavy drummer and his use of a double bass pedal left little doubt as to his power. As the set continued, the pulse became rockier and Rupp turned to the violin bow to draw even more sounds from his instrument. At one point when the sound lessened, and the drums dropped out, Rupp took to the striking harmonics and slowly evolving phrases until reaching a density that rivaled what came before. The duo rode this to the heart pounding climax, coming to a sudden stop, as if their music was a tomato thrown against the wall leaving the skin shattered and the pulp running down in rivulets of sound.

Rupp and Wertmüller were followed after a short pause by the American/European collaboration Cactus Truck (John Dikeman, tenor saxophone; Jasper Stadouders, electric guitar & bass; and Onno Govaert drums), with guitarist Ava Mendoza. They too came out full blast - Dikeman must have damaged his internal organs releasing such a primordial skronk on his sax. The band was a continuous whirl of sound, sometimes almost too overpowering for the saxophonist who did battle with the unconventionally non-linear and loud bass playing of Stadouders and the powerful drumming from Govaert. Mendoza brought both a shimmer and some grounding. Some of the best moments were when she and Dikeman engaged in a long duet, bouncing ideas off of each other with ease. Mendoza's preceding solo credenza offered some of the clearest playing of the set and a brief reprieve from the maelstrom that had preceded. Towards the end of the set, the seemingly dissociated shards of music suddenly came together for a fierce finale.

Saturday night brought some respite for the ears. The long standing group Barcelona Series, consisting of Sven-Åke Johansson (percussion), Andrea Neumann (piano innards), and Axel Dörner (trumpet), treated a small appreciative audience (it was startling cold day for mid-March) to some quiet and contemplative music. Johansson's set up was expanded from opening night. Still prominent was the cardboard, but in addition had the entirety of a standard drum kit separated out like a percussion laboratory. Neumann literally played the inside of the piano - the sound board with strings was hooked up to amplification which she plucked and bowed to create a myriad of tones and percussive sounds. Dörner, situated in-between, was seemingly the most conventional, but a table full of mutes and effects at his side told a different story. In his playing, he mixed fuller tones with the sound of air passing through the horn, and the balance of small sounds and larger gestures was a perfect compliment to the careful music that his partners were making. In fact, it was not always clear who made what sound, though Dörner was playing a wind instrument and the and Johansson percussion, they seemed to easily cross into each others sonic spaces. Electronics too meshed with the analog, while Johansson found all sorts of ways to play his  instruments, including slapping them with a cloth and the aforementioned soap dish technique.

Barcelona Series was followed by the new collaboration of pianist Sten Sandell, percussionist Matilda Rolfsson, and dancer Marcela Giesche. This group opened with a dramatic gesture from Giesche amidst a bright splatter of notes from the piano. Rolfsson played a bass drum turned sideways and approached it with a certain panache, sweeping, scraping, rubbing and hitting the instrument while intensely following the dancer as she moved across the stage. Sandell appeared to be the musical director - a flurry of notes would nudge Rolfsson to respond in kind, which was then reflected in Giesche's movements. As enjoyable as it was to hear Sandell's improvised melodic statements, it was even more captivating to feel the intense wordless communication between the drummer and the dancer.

The following Tuesday was the last concert for the month, which picks up again on April 6th and 7th with what promises to be a very exciting group of musicians (see below). However, the closing act for this first sequence was none other than Connie Bauer (trombone) with William Parker (double-bass) and Hamid Drake (drums). The room was packed, from what I heard, it was a sold out show.

The trio started out deliberately, Bauer quietly introduced the theme, a string of notes, while Drake approached the kit with restraint, and Parker delivered a set of legato phrases. The energy began to pick up and Bauer's melodic snippets grew longer, louder, and a bit mote brash. Drake, letting loose a bit, accentuated Bauer's syncopation, seemingly telepathically, and obviously showing the deep empathy between them. Bauer's blowing was non-stop, it grew more powerful in response to Drake's more aggressive but always supportive playing, and finally he brought the group to an early peak. Suddenly Parker seemed to really engage. Standing a bit further off to stage left, Parker had seemed a little less connected. He had been listening, responding, yet had been totally subsumed in the music, however he began playing percussive elements and double stops to change the flow of the music.

Their second tune began as an exploration. The musical search party was led by Parker who gingerly extracted notes from his bass via bow as Bauer employed some short staccato phrases and Drake switched to sticks, then eventually to hand drum. Finding the most human sounding cries he could make on the bass, Parker dove head first into a long, introspective, and haunting solo, completely shifting the energy of the hall. Parker worked his way back to the group and together they brought the improvisation to a fiery completion - and it did feel as if a journey had been completed. A third improvisation began between Drake and Parker, the latter playing a melody on wood flute and the former on hand drum, eventually adding some vocalization, and after a few aborted attempts to cut in, Bauer decided to let the duo run their course. The final tune of the night kicked off with a strong melodic statement from Bauer and a powerful push from Drake's drum kit. This trio has an album, Tender Explorations on Jazzwerkstatt from 2013 and if we're lucky, this show was taped for a future release.

The first set of shows for the FMP exhibit at the Akademie der Kunst was both a look back at the important history of the label and concert series, but also a look forward with musicians like Dikeman and Mendoza along side Rupp and Wertmüller, along side Rüdiger Carl and percussionist Sven-Åke Johansson, and so on.

The exhibition runs through May 6th.