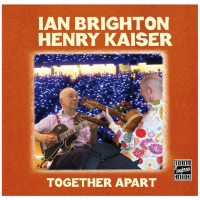 This is an interesting album, and good to see (and hear) Ian Brighton on another recording after his comeback album Now and Then from 2016 after a nearly forty year lay-off. On this release each player recorded their parts individually, sending them to one another so that they could then overdub their parts over the existing track, with Henry Kaiser being solely responsible for mixing together the final product.

For an album of improvised duets, it actually starts with two solo pieces, ‘In Memoriam – Jack and Rose Brighton’, and ‘Spoonful’. Brighton’s dedication to his late parents is a beautiful piece full of bell-like harmonics, sustained tones, ethereal sounds and sharp attacks that gradually fade away. This is followed by Kaiser’s solo contribution, the blues piece ‘Spoonful’, which I had doubts about on seeing it in the track listing and on hearing the all too familiar opening strains. However, throughout the course of the piece Kaiser juxtaposes the prominent riff against more angular and fragmented phrases that just about pull the piece in line with the rest of the album.

So to the duets, starting with the aptly titled ‘Getting Started’, a tour-de-force of string harmonics creating an intricate web of rhythmic interplay involving hocketing lines moving from one part to the other. Other highlights for me out of the nine duets include, ‘Sounds of the Soil Pt2’ (dedicated to Tony Oxley, the legendary British jazz and improvising drummer/percussionist) a piece exploring noise based materials such as scraping, rubbing, tapping, and buzzing strings, creating a very direct sounding piece. Then there’s the resonant ‘Cathedral Voices’, with a nod towards ‘The Chapel of Splintered Glass’, a track on Brighton’s first album Marsh Gas from 1977 that also exists within it’s luscious reverberations, although this time utilising studio effects to create the sustained delay and not being recorded in-situ like ‘Splintered Glass, which was recorded at Chelmsford Cathedral. Also, ‘175 &amp; H’, (a reference to the Gibson ES 175 guitar that Brighton uses) a sparring piece that is characterised by it’s cutting attacking notes and sounds, which nearly slips into a fragmented melody with chordal accompaniment structure for the middle section.

One would think that with two very different guitarists that have highly distinctive individual styles the pieces might jar or at best be reduced to a collage only texture, especially due to the way it was recorded. But actually for most of the recordings the individual parts are sympathetic towards one another and blend well as would be hoped for within a duet context. Only the final track ‘In the Last Place’, for me, fails to work as a coherent piece, with Kaiser’s trademark distorted guitar, full of dive-bombing notes, and rock tremolo arm histrionics sitting uncomfortably against Brighton’s much cleaner, direct and honest style. Overall Together Apart is a success with it’s swirling menagerie of harmonics, dissonant fragments, volume swells, and twanging strings that have been freely utilised, mainly within an empathic and sympathetic set of pieces that work, most of the time, with each other’s playing.