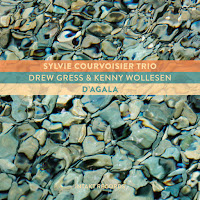 Pianist Sylvie Courvoisier is back with her trio, Drew Gress on bass and Keith Wollesen on drums. Courvoisier has been on a roll these past couple of years, with a number of superb partnerships, numerous supporting roles, and many collaborations. D’Agala is only the second album with this trio, following 2014’s Double Windsor. When she released that album, on Tzadik, Courvoisier wrote, “John Zorn had been asking me to do a piano-trio record for ages, but I always felt the great history of the piano trio was so intimidating.” This time around, she digs deep into her personal history and turns out a dramatic and sensitive album, filled with emotional and uniquely thoughtful music. This is due, in part, to the way Courvoisier, Gress, and Wollesen each seem to draw music music out of, rather than playing music on, their instruments. It’s a subtle difference, but the opener, “Imprint Double (for Antoine Courvoisier)” showcases this beautifully: Courvoisier begins in a stride mood, a nod to her father who plays piano and taught her to play boogie and shuffle. It’s not long, however, before the trio goes to some very different, inspired spaces beyond dixieland.

I have no theories on why this is, but it seems like some of the best tributes to Ornette Coleman recently have come from piano players, ironically, since he eschewed the instrument for most of his career. Aki Takase released her great double-album with Silke Eberhard a few years ago, and on “Éclats (for Ornette Coleman)” the trio pays tribute to Coleman with a brisk head-improvisation-head structure referencing much of his earliest work. Gress, and Wollesen dive headfirst into a blues, something that always lay at the heart of Coleman’s work. Gress and Wollesen open with more of a Haden/Higgins feel, but channel Izenzon/Moffett during an extended free workout in the latter half, before Courvoisier circles back to the melody. Throughout the album, there’s a lightness and humor that brings the whole performance to life.

“D’Agala,” the title track, is dedicated to Geri Allen and is an incredibly evocative, dynamic performance. Courvoisier and Gress double on the melody, as Wollesen plays a soft, percussive textural pattern. Gress takes the first solo, an emotional, thoughtful reflection on a great artist lost. Courvoisier’s solos for a short while before imperceptibly sliding back into the melody. The somber, reflective mood is revisited on the finale, “South Side Rules (for John Abercrombie),” another tribute to a master who recently died. Gress opens with incredible runs, accented by Courvoisier’s searching lines. Wollesen keeps the whole piece moving forward with nicely harmonic cymbal playing. He’s mostly off the drums, proper, throughout the piece, instead mixing sticks and wire brushes on cymbals to great effect. In the final seconds, the whole trio rapidly comes together for a dramatic punctuation mark of a riff.