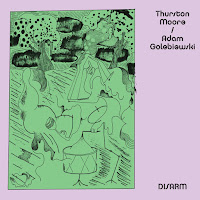 Iconic experimental guitarist Thurston Moore explained recently what is his own Rock n Roll consciousness, the title of his recent solo album (Ecstatic Peace, 2017). Rock n Roll consciousness is actually about sex. When Moore’s defunct group Sonic Youth visited the Rock and Roll Hall of Fame Museum, he learned that the term Rock N’ Roll was an African-American slang for having sex. It took Moore some time to absorb this kind of realization and in a recent interview to Rolling Stone he already identified with this kind of logic: “sex is nature, and nature is everything, and then rock & roll is everything.”

Moore brings this kind of Rock n’ Roll consciousness to a series of free-improvisations with Polish experimental drummer Adam Gołębiewski. Indeed there is no doubt that they were channeling the passion, emotional intensity and the totality of the experience in the halls of Warsaw and Gołębiewski’s hometown, Poznan, in May 2014, when these sessions were recorded.

Moore and Gołębiewski met and played together for the first time in 2013, in a trio with Yoko Ono. Gołębiewski had already played with innovative improvisers as reeds player Ken Vandermark, cellist Fred Lonberg-Holm, trumpeter Mazen Kerbaj and Moore’s frequent collaborator, sax titan Mats Gustafsson. Like Moore, Gołębiewski seeks to extend and expand the sonic possibilities of his chosen instrument.

Moore sets the atmosphere of the first piece “Disarm” with free-associative, series of thorny, feedback-laden sonic collisions. All Gołębiewski attempts to discipline this abstract flow of fast-shifting collisions with some loose, rhythmic coherence fail and this improvisation heads into more physical and more brutal confrontations. But Moore and Gołębiewski did not lost faith in each other. Soon on the following “Distend” both calibrate on an immediate, noisy frequency and act as one wild, freakish entity that threatens to crash all on its way. The short and sparse “Disturb” serves as a suggestive, teasing interlude before Moore and Gołębiewski race after each other in another set of intense physical collisions, some explosive ones, others surprisingly comforting and caressing, all totally exhausting. The last piece, “Dislodge”, summarizes the essence of Moore and Gołębiewski's interactions - stormy, dissonant and noisy but at the same time attentive, curious and urgent.