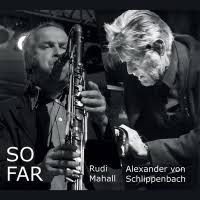 Pianist Alexander von Schlippenbach's position in jazz is well secured. He was a founding/integral part of the development of the European avant-garde, leader of the highly regarded and long standing Schlippenbach Trio with Evan Parker and Paul Lovens/Paul Lytton, leader of the Globe Unity Orchestra, and a dedicated interpreter of the music of Thelonius Monk.

Clarinetist Rudi Mahall is another force to be reckoned with. Like Schlippenbach, Mahall lives in Berlin, is a member of the Globe Unity Orchestra, plays with Schlippenbach in Monk's Casino, and is a member of the wonderful Die Enttäuschung piano-less quartet. Mahall has released collaborations as a duo with pianist Aki Takasi (who is married to Schlippenbach), but to my knowledge, this is the first recording of Mahall and Schlippenbach alone together - so kudos to Relative Pitch for making this a reality because the results are fantastic!

The duo kicks off with 'all Jazz is free' - a title which is a quote whose origin Evan Parker, in the liner notes, tries to trace. Apparently it has been attributed to himself, but he believes it was from something he once read … regardless, what Parker ends up providing is a very succinct summation of the development of Free Jazz, naming names and explaining the inexplicable. In the end, he states “AvS has retained an affection for the ‘j-word’, insisting that there remains some however hard to define attitude which distinguishes his approach from the totally open improvisation often associated with other European developments …” And from the moment the track begins, it’s obvious that Parker is spot on. We first hear Mahall’s bass clarinet with a loopimg mid-register melody shadowed by rhythmic and, mostly consonant, comping by Schlippenbach. Soon, it isn't Mahall leading but Schlippenbach's jazz inflected streams of consciousness darting about. The duo proceeds in a good natured pursuit - handing off leads and supporting roles, intensifying as they go. Schlippenbach's rhythms get punchy, giving Mahall something to run into and bounce off in a new direction. The slow down at the end is simply to end the track, not out of a lack of ideas.

A couple of stand out tracks - among an album full of them - are 'knockemstiff can can' which begins stiffly, with some randomly assembled arpeggios from the piano juxtaposed with an oscillating bass clarinet line. The piano playing gets denser as the bass clarinet continues to jumps octaves, eventually leading into some heated 'discussion' between the heavy rhythmic chords and obtuse melody. 'boiling desire' is a ballad of sorts, Schlippenbach's romantic side comes to the fore in the opening measures. Mahall eventually joins the slowly unwrapping tune on, I assume, the Bb clarinet. The higher timbre wind instrument weaves an evolving melody over the deliberately paced track, leaving many ellipses and open questions.

Overall, the album is well balanced and quite approachable. This egalitarian outing is a great addition to either your Schlippenbach or Mahall discography.
Paul on Tuesday, April 10, 2018
Share