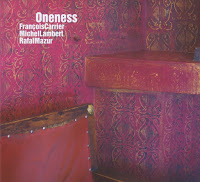 We've been following the Canadian duo of alto saxophonist François Carrier and drummer Michel Lambert for many years now, and with enthusiasm. And for every duo album, they also seem to invite one additional guest for performances when travelling around. The partners have been pianists such as Uri Caine, Alexey Lapin and Steve Beresford, bass players such as Jean-Jacques Avenel and John Edwards, but the most natural partner of the last years has been Polish acoustic bass guitarist Rafal Mazur.

Carrier and Lambert have performed zillions of times together, and they know each other through and through, a thing you can hear in the almost organic interplay and natural understanding of how the improvisation should evolve. Amazingly enough, Mazur is a great addition to this, not an easy feat to suddenly expand a well-established duo, yet it jells. The probable reason is Mazur's lyricism on his instrument. The acoustic bass guitar allows him to play in a much faster and agile mode than a double bass, and his role is not so much to underpin the rhythms, but to echo the high alto tones with deeper and equally fast runs. Carrier himself is a lyricist, someone who keeps looking for phrases that keep re-emerging without becoming patterns, like melodies in the making, organically growing, evolving in various directions, forking out like branches from a tree, changing yet remaining anchored, getting shape without repeating itself.

Even if the music can be very intense, this wonderful and joyous sonic quality is maintained in most pieces, including when Carrier switches to Chinese oboe, an instrument with a very shrill sound, yet an interesting addition that offers variation in the improvisation.

Lambert, as also mentioned before, shares that great combination of power and subtlety. Check out his "Journal des Episodes", a solo percussion album with no less than 92 percussion pieces, outnumbered by its volume 2 with 97 variations. This is relevant in the sense that despite the similar line-up, it shows the musicians' creativity to keep looking for new forms.

The trio's music is deep, it is spiritual in its intention, and it manages to achieve that cohesive power that is the result of carefully managed freedom. The "Oneness" of the album's title means something. It is not only the spiritual level of becoming one with nature or the universe, but starts with the musical effort to co-create beauty, an effort which requires to abandon the self to the greater effort of the band. Yet at the same time, it is incredibly emotional, through the intensity of some moments, or the howling capacity of Carrier's playing at moments, or through the cautious shifts between calm and tension. This paradox of a self-effacing emotion bond defines the music. It is what makes it attractive and interesting. 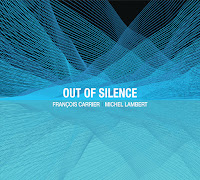 "Out of silence" is the duo's fourth album in this line-up, a strong sign that their approach gets traction. It has the purity of musical essence, lyricism and rhythm, with no place to hide. Like all their other albums, this one is also a live performance, now recorded at Ryan’s Bar, Stoke Newington, London on June 4th, 2015. As usual, what you get is this wonderful mix of buttery tone of the sax with razor-sharp percussive energy, resulting in a delivery that is both intense and serene, seeking beauty in sound and interaction, authenticity and life.

Despite the constant flow of sound, they are also not in a hurry either. The pace is easy, and the fact that Lambert even gives Carrier a few minutes of solo space on "Soul Play" illustrates this well. Despite the title's references to eastern philosophy, and the poem written by Carrier that explains where the track titles come from, this is not 'zen' music, or at least not to my experience. Where you would expect calm, subdued and contemplative sounds, the music here has this wonderful playful nervousness and agitation, that may even make it more spiritual in my opinion: buoyant, soaring and energetic. Like birds on a spring morning.

For no reason
A thousand birds
Music Occurs
Soul Play


Watch a duo performance of two years ago in Reykjavik, Iceland.