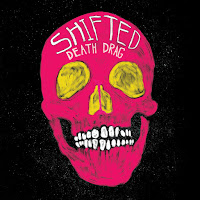 For an album that for most of its duration thrashes in a cloud of free improv and noise metal madness, the opening twelve minutes of Shifted – the debut release by Death Drag with Mike Caratti on drums and compositions, Roberto Sassi on electric guitar, Santiago Horro on electric bass, and Luke Barlow on Fender Rhodes and keyboards – are deceptively subdued.

The birth of the record’s first cut, “Golden Root Complex”, shimmers with an otherworldly textural richness. Here Barlow’s Fender Rhodes – featuring a fuzzy sound reminiscent of jazz fusion’s golden years – is involved in solitary and lengthy harmonic explorations. Clearly and proudly inspired by Olivier Messiaen’s organ works, the piece recontextualizes its own inspirations in a void between post-metal and free improvisation. It maintains a deeply solemn, liturgical mood throughout, but simultaneously comes over as delightfully unnerving, pushed out of phase, and not quite right. The rest of the instruments eventually join the electric piano, with Sassi’s guitar warping and screeching in anguish, and saturate the expanse laid down by Barlow. Still, the track’s slow roll and its bubbling, amorphous mess never fully (trans)form.

The following four songs are sharper and straighter, closer to projects such as John Zorn’s Simulacrum, yet Shifted obviously remains first and foremost a record based in Caratti’s compositional obsessions with avant-garde composers and expanded by freely improvised embellishments. Or, to put it another way, while Simulacrum and similar outings feel like progressive metal played by jazz musicians who end up obeying most of the genre’s tropes and limitations, the core of Shifted is free and disjointed, almost defiantly so. The result of such an approach is music that feels neither here nor there and instead occupies a space of its own.

For example, “Uncredited Corpse” initially appears to be almost an archetype of the noise metal niche, propelled by Horro’s distorted bass positioned closely to Bill Laswell’s classic sound, only to have Caratti’s aggressive and rapid drumming, enveloped in a constant struggle with chaotic guitar riffs, turn the composition into an absolute belter. “Shifted” and “Manual Evacuation” even manage to introduce fragments of groove which is, of course, soon gleefully destroyed courtesy of an insane guitar crescendo that reaches painful heights and a manic dissolution of structure that leaves behind only sparse sounds lost in the soundscape.

The album ends on a curious, exuberant note. The closing “Virgin Gutter” starts minimalistic, gains speed constantly helped by chugging bass lines, and all along projects a heavy atmosphere while Sassi’s guitar once again spazzes out in the foreground. It’s a final, never ending plateau. An exclamation point of a really gripping record.