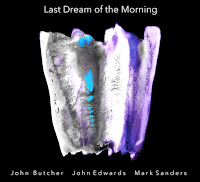 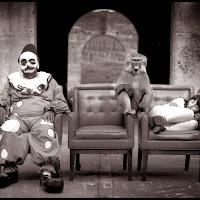 Each of these CDs presents saxophonist John Butcher as part of a trio. Each consists of close associates. Last Dream of the Morning is insistently acoustic, A Geography for Plays largely electronic. The musics, however, are defined by the aspect of familiarity, a kind of intimacy in sound, rather than by the distinction in material production. Similarly, distinctions between free jazz and improvised music fall away here. Kinships and antecedents extend from AMM to Sun Ra and they’re being consistently synthesized and extend into new terrains.

Bassist John Edwards and drummer Mark Sanders have become the defining “rhythm” pairing of English free jazz, working together for decades in groups with Evan Parker, Veryan Weston and many others. If this is a first meeting of a trio with Butcher, past associations range from the London Improvisers Orchestra to a quartet with Phil Minton and fine duo recordings with both Edwards (Optic, Emanem, 2003) and Sanders (Daylight, Emanem, 2012). That notion of a “rhythm section,” though, however wonderful Edwards and Sanders are at it, is hardly appropriate here: propulsive force, when it arises, is a function of the entire trio. Elsewhere the three are a union of sonic and temporal explorers: Sanders, who organized the session, is a particularly inventive drummer, and one of the few who can remain seated at a kit and create the kind of sonic richness and resonance more apt to be associated with working with a bass drum and independent sound sources.

The music is often a maelstrom of time: in the 14-minute “Gridlocks,” parts seem to be going forwards, backwards and standing still, all at once and with a kind of purposeful unity. Between Sander’s nest of metallic percussion sounds, Edwards’ pulsing undercurrent and Butcher’s industrial-strength tenor sound, the three resemble some of Sun Ra and the Arkestra’s more inspired adventures, an astonishing achievement for a trio. On the opening “Lucid,” Butcher extends a traditional tenor line, generating lines in which multiphonics suddenly inject themselves amid single notes.

The Open Secret, the trio of Butcher, Gino Robair on energized surfaces, piano and blippoo box (described by its inventor Rob Hordijk as “an audio sound generator that operates according to the principles of chaos theory”) and Dieb 13 on turntables and computer, is similarly built on long-term projects. Butcher and Robair have been a duo for over 20 years, previously expanding to a trio with several musicians, including Derek Bailey and John Edwards, while Dieb 13’s association with Butcher includes the eight-member John Butcher Group that produced somethingtobesaid in 2008.

It’s in the nature of Robair and Dieb 13’s contributions to inevitably blur, but sonic mystery is more than side-effect here, with the two contributing both great invention and refined subtlety. Before Butcher’s high-speed, pecking soprano enters the opening “The Lobbard Change Hisstops” (ambiguity is also a function of the titles), there’s a piping, flute-like sound that only occasionally seems to tip into oscillator. “Dart on Discourse” is an exercise in the beat patterns that arise amidst close frequencies, the result a kind of phantom band in which the trio create other voices. “Olecasandrum” sounds like radio signals in fluid, at times with hints of language just beyond comprehension, gradually moving through other zones, including a soprano saxophone that achieves the dense chirping of a flock of birds. “Last Morning of the Dream” (the connection of the CDs may be inevitable) is witty, bizarre and well nigh indescribable. “Tinflappant” foregrounds Butcher against almost acoustic percussion (an amplified snare?) and a scraping drone, resulting in a spectacular tenor oration that extends to driving, free jazz squall. “Giant Skull Gasp” is a click language, while “Pearlagraph, the Pearlagraph” is at times so subtle as to suggest patterned air with key clicks and feedback.