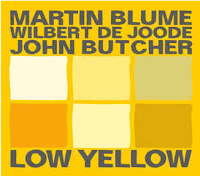 German drummer Martin Blume, Dutch bassist Wilbert De Joode and British saxophonist John Butcher have been playing together since 2004, so it’s surprising that Low Yellow is their first actual recording.

The title refers to music as color not applied too thickly but rather delicately, it’s one of the listening pleasures of this album to see how the musicians develop new sound aspects on the basis of finest repetitive improvisational patterns. A certain nuanced lyricism (especially in Martin Blume’s way to play the drums) is more important than energetic iconoclasm. The trio’s music is full of melodic, tonal and harmonic miniatures, contingent ideas that the trio merges into a fascinating mosaic of fragments.

“Flowers“, the 14-minute opening track, is a perfect example of excellent teamwork. The musicians constantly build new alliances, first De Joode is the counterpart to Blume’s percussive bustle and Butcher’s nervous notes. Then De Joode manages to win Butcher over to his side with a smooth walking bass, while the sax contributes elegant trills. In general, it’s Butcher with his guttural and creaky sounds, who’s torn between the bass and the drums. He uses Ben-Webster-tinged melodies as well as Evan-Parker-influenced lines to prevent the improvisation from falling apart. The piece itself is highly dynamic because of these various fields of power and the perpetual turns.

For all three musicians sound is the central compositional means. Wilbert De Joode, for example, digs into repetitive figures until a new door opens, so that he can enter a new space and the others can follow him. Therefore he uses a chamber bass, a unique instrument, only very few of them exist. He was looking for an instrument that develops its tonal quality slowly, something that floats into the room like lava. As for compositional means his bass offers a lot of possibilities: If you slap the gut strings harshly the sound is very immediate, it’s sharp as a knife. When you use the body of the bass, the sounds created are rich and voluptuous.

Martin Blume, who functions as a kind of antagonist to De Joode, adds his qualities as a sensitive, yet very busy drummer, someone who’s always there, even if you think you could not hear him, as German critic Markus Müller once put it. His style is finely balanced, he contributes to the atmosphere by subtly directing musical situations with his extended materials.

John Butcher though, who’s name has been connected with sound exploration for many years now, uses his expanded vocabulary for saxophone (multiphonics, overblowing, extremes of the dynamic range, twittering, mumbling, breathing, wind noises) to bring the two poles together.

Blume, De Joode and Butcher regard improvisation as the freedom to recognize and respect the uniqueness of each individual playing situation. On this album it’s obvious that this trio consists of three powerful and distinctive voices, their individual sounds are easily recognizable. They function as a compositional unit in which the improvisational means demand fast responses, while the instrumentation makes it possible for each member to adopt a clear role to generate an overall structure for their music. Or, as John Butcher put it: “All of this leads to the store of ideas and memories one draws upon, and anything that might prove workable in the longer term has usually accrued in small increments. Slowly, the pieces come together. Big ideas are of little value in improvisation.“

Low Yellow is available on CD. You can buy it here: http://www.jazzwerkstatt.eu/menu

Watch a complete set of the trio at the Dom Cultural Center in Moscow from November 2016: