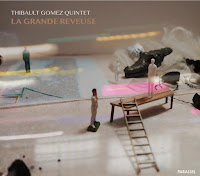 If the name Thibault Gomez is unfamiliar to you keep an eye out. Thibault and his quintet won the tenth Keep an Eye International Jazz Award which is awarded to outstanding young vocalists and instrumentalists from the USA, Europe and the Conservatorium van Amsterdam. Thibault began playing piano when he was just 7 years old and later enrolled in the jazz department of CRR de Chambery Annecy, later specialising in improvisation. He is active on the jazz scene, especially lately with his quintet. The quintet are: Robinson Khoury (Michel Becquet, Uptake, Francois Moutin, won the Jay Jay Johnson international prize for trombone and with his band won the Rezzo Focal Jazz a Vienne in 2014) on trombone, Pierre-Marie Lapprand (Live a la Source, MaDam RamDam, Mental Climbers), on saxophones Etienne Renard (Makafunk) on double bass and Benoit Joblot (Luise Volkmann) on drums.

So to the CD – it is a journey of sound for sure. The first track ‘ Les Escargots n’ont pas d’orielle’ begins with trombone solo over percussion and gentle, so gentle piano. Slowly, creeping we go before the sax joins with some gorgeous cropped counter themes. The track builds around the slow, gentle melody yet the building consists of bricks of sound provided by the wood and brass, all while the piano continues its intricate gentleness. A lovely contrast of sounds and the piano strings are used effectively. Every so often the sax spits out an aside - sounding like a well-placed fart if there is such a thing but it keeps the ears engaged. The second half of the track is more thematic and the rhythm becomes established as a gentle almost calypso – but not quite. A fun opener and there is a lot going on.

‘Voyons Monsieur sortez de chez moi et rentrez chez vous’ ( Look Mister, get out of my house and back to your own) is next and this track is great improvisation, yet there is also a unity and coming together of the quintet on more than several occasions, slipping into thematic overtones with deep, resonant trombone accompaniment, seamless and offering an almost constant regular change of texture and rhythmic patterns, often to the slow, dominant theme which pervades the track. At times it feels the piano sets a theme, the others take it and work with it before one of them solos and changes the essence. Interesting and great development , the piano line being one to listen to throughout.

‘Rhinocerous Pirate’ is full throttle heavy on the improv and free playing music at its best, the quintet listening and reading each other like well worn books. At times it is heavy going and there is a tendency in this track to follow one line for just a tad too long but it is fine. The trombone is excellent in the solo, as is the sax. 'La montee des ballons' begins with a trombone solo which is rather lovely, and around the 2 minutes mark the band join with a slow swing rhythm which creates an atmosphere and the track swings very nicely thank you along and along, a beautiful sax solo, a gentle bass line and the piano occasionally letting loose. Very pleasant. La Grande Reveuse