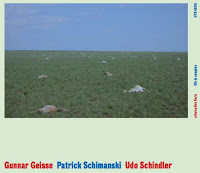 The first track of the album Life is Complex... by Alternative Facts sounds more like a large ensemble than the trio they actually are. I hear drums, cornet or even cornets, saxophone, euphonium and electronics. I don't know how the three musicians manage to create such a broad range of sounds on the first track.

The second track begins in a reduced mode of some electronic sounds forming a kind of beat that is the basis of the next few minutes. The cornet builds a variety of sounds on top of it: breathing and high sounds turning into a micro melody.

Five minutes in, the drums play a rhythm that reminds me of what usually is described as tribal music - though I am no expert in this field and I am not sure if it is appropriate to use that term - just to move on from that point into a more open field again.

In this short description of the first two tracks there is already a lot of the things implied that permeates the whole album.

Building beats and sounds with electronics is a huge part on the record. The drums and the electronics prime the whole album without being reduced to a straight beat. Patrick Schimanski moves from abstract sounds to micro rhythms to straight beats (saturated by any background you can think of) and back again. The drum sound has a percussive tone to it as well: There are bells and congas and more like it. Patrick Schimanski is working a lot with different theaters around Germany and he is the drummer of the band 48nord.

The different wind-instruments are the second thing that you can focus on while listening to this album. Udo Schindler plays the cornet, saxophone and euphonium. As in the first track you might hear more than one at a time or it might at least sound like it. That also might be the addition of the third man on board: Gunnar Geisse who is responsible for guitar and 'virtual instruments' - a new term to me. But I think that is the reason for the large unite sound in the beginning. Gunnar Geisse has worked with a lot of different musicians in the scene of improvised music.

This might reflect the idea stated in the names of the different tracks: The names can be read as one sentence about the diversity in life. The statements on their own seem to be a bit declamatory, too solemn even. But the music is a perfect expression of the diversitiy and can be heard as a political statement declared using beautiful music
Stef on Friday, May 04, 2018
Share