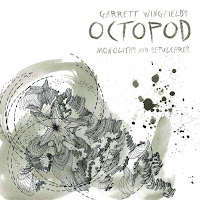 Monoliths and Sepulchres is the debut album by Garrett Wingfield’s Octopod. The band features Garrett Wingfield on saxophones, his twin brother Luke Wingfield on trumpet, Aaron Dutton and Emilio Mesa on saxophones, Connor Eisenmenger on trombone, Gregory Santa Croce on piano, Aaron Holthus on bass, and John Sturino on drums. All of these musicians studied in the University of North Texas, School of Music, and most worked their way through Jazz Studies and the “Lab Bands,” ending up doing star turns in UNT’s famed One O’Clock Lab Band.

The big band repertoire they played while in the Lab Bands instilled in them many splendid things: an astounding capacity for playing intricately-layered arrangements, incredible technical and improvisatory skill, and a deep sensibility for the history and the possibilities of jazz composition. These boys have been well-trained, which is obvious on Monoliths and Sepulchres. Tight, elaborate interplay transforms into wild—and sometimes silly—solo and group improvisation that shreds repressive strictures like the Hulk ruining yet another change of perfectly good clothes. On the tune called “Pizza Ball,” for instance, the jet propulsion and volume they perfected in the Lab Bands gets condensed into 76 seconds of octet insanity, demonstrating an old autoworker’s maxim: if you don’t know how to break your machine, then you shouldn’t be running it.

Garrett Wingfield’s compositions demonstrate his unique skills as a writer and instigator of group improvisation. On “Buried Construct,” moments of orchestrated, cascading big-band style playing intermingle with free call-and-response chatter amongst the horns. They create complicated chords that fall apart in wondrous dissonance. It’s a bit of Stan Kenton meets Charles Mingus meets Ornette Coleman. “Berne Center,” which won Wingfield a 2018 ASCAP Foundation Young Jazz Composer Award, moves in and out of mathematical precision and pandemonium, yet somehow still swings. Here, as on “Memescream,” when Garrett Wingfield’s baritone sax locks up with Holthus’ bass and Sturino’s drums, you’d best hold on to your hat, sister, because who knows where this train is barreling. The controlled-chaos style of Wingfield’s compositions is perhaps best displayed on “Heavy Shit.” Each musician enters the fray at odd angles. They execute rigorous and unexpected solos, deftly reuniting in complexly-scored counterpoint.

Because I live in Denton and work at UNT, I have been lucky enough to listen to these terrific musicians over the past few years. It has been a true pleasure to witness them perfect their chops and explore the possibilities of free improvisation. Monoliths and Sepulchres displays their seriousness and their wackiness in equal measures. It is a dense, sophisticated record, yet it is also full of youthful humor and quirky, knowing references to the tropes of the trade. I look forward to following the careers of this set of promising musicians, composers, and educators. The future of jazz is secure in their capable hands.

Listen to the album, and support the band here: