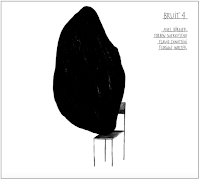 Trumpet quartets are rare. But here you have one. The quartet are Axel Dörner on firebird trumpet,  Torben Snekkestad on reed trumpet, Flavio Zanuttini on (normal) trumpet, and Florian Walter on hechtyphone. Huh? A hechtyphone? Yes, a hechtyphone. The instrument is built by Bernd Schramm from Köln in Germany, and it consists of three bells, four pistons, a bassoon and two different saxophone inputs, and an optional integrated speaker. I guess there's only one in existence. It looks like this : 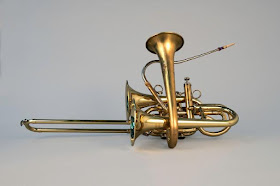 With these four variations on the trumpet, the quartet wants to create different sounds, exploring new 'noise' as the band's name suggests in French. Other albums by Florian Walter also carry the 'Bruit' title, so there's a link to the saxophonist's, clarinetist's, hechtyophonist's other work. Each track or improvisation is called an 'object', as if it was something tangible that you can touch and look at from various angles, or something that has a function, and definitely not feelings, in which case it would be a 'subject'. Interestingly enough, that is not the case. There are feelings, sentiments and sensitivities. Almost inevitably.

The overall sound is minimalist, with the various trumpets creating a collective kaleidoscope of shifting tone colours, often voiced with clarity, although once in a while whispered or snorted. Their explorations are called experimental, but they go beyond the experimental. This is not just some programmatic and systematic observation of possible interactions. No, it's music. It has its own aesthetic, a clear intent to create unseen perspectives as a coherent whole, and not just sounds for sounds' sake. It's calm, austere and well-paced, with sounds that sometimes emerge in a very organic way, as if representing animals twittering to each other, but most of the time there are underlying feelings of sorrow, distress, and joy that are uniquely human and lift the whole project into the world of art. It means something. It opens perspectives and it is - at least to people with open ears - a real joy to listen to.

It is not only unique in its purpose and line-up. It's also a pretty unique listening experience.