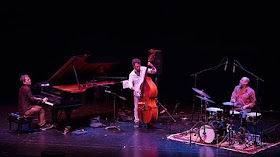 If you didn’t catch the Brad Mehldau Trio tour stateside, you aren’t too late to see them—cross the Atlantic and nab a ticket for a show in Rome, Prague, Athens, Warsaw, or Madrid. The Trio finished up in New York on May 2 and starts their European tour in Berlin on May 7, hopping to Dublin the next day, giving three (already sold out) concerts in Amsterdam, and continuing with nearly twenty shows in Europe to finish in Marciac on July 29.

I grabbed tickets at the start of the year for Mehldau’s April concert in Dallas, hoping he’d be playing the kind of longform improvisation on solo piano that has made this tough year easier for me to take. But I hadn’t done my research. His latest solo tour finished out in France on April 4. By mid-spring, the bill changed to reflect reality: the Trio was touring in support of their May 18 release, Seymour Reads the Constitution! (Nonesuch). One wouldn’t call this night’s music experimental—the experiment’s been tried, and most consider it proven—but the triple-ply of Brad Mehldau, Larry Grenadier, and Jeff Ballard created a braid of sound that stayed tight throughout the evening, keeping avid Mehldau fans hoping for more and season ticket holders happy.

All business, Mehldau came out in his usual working uniform—a cotton T-shirt, dark chinos, black blunnies—placed two rolled towels on the piano, and addressed the keys. Ballard popped the toms and the Trio’s signature mix rolled out like a well-oiled engine cruising smoothly down the road with nothing in its way. Mehldau never seemed to open his eyes until the final bars of the first tune, then the Trio moved immediately into the next—“Spiral,” the first track on the forthcoming album—with Grenadier’s fingers prowling around the bass and Mehldau’s right hand dropping lightly and sparingly on the keys. Ballard brought out a solo, all speed and smoothness as he rolled on the snare, then broke it down a bit before the finish. With the pace and tone established, Mehldau acknowledged the audience for the first time, introduced a new waltz in C minor, and dove in again with his body still furled up and his hands close and quiet on the keyboard. Grenadier started heating things up a bit on the bass after seven minutes, the drums brought it all to a simmer in a minute more, and the song’s centripetal force built until falling beautifully in on itself and scattering. By the end of “Backyard,” the fourth tune in the set, we were already past the halfway point of the concert, we just didn’t know it yet. The song was more piano-forward than those before it, but Mehldau was still only working the center of the keyboard. The trio’s construction remained tight but began to show some tantalizing space between the threads, opening little windows where each performer’s contribution shimmered above the surface for a moment before submerging into the mix.

Only on their fifth song, Sidney Bechet’s “Si Tu Vois Ma Mère,” did the trio finally loosen up, relaxing into a languorous pace and creating the sense that the hour was getting late. Grenadier plucked the bass alongside the divine swirl of Ballard’s brushes on the snare—a light tap on the cymbal now and then marked the flow—and, with the background for some feature piano sketched out, Mehldau dropped his shoulders a fraction and began a slow, lovely run of choreography on the keys, letting his fingers fall like lead sinkers in water to focus our attention on the moments when the hammers strike the strings. The bass picked up the melody and Grenadier drew us in, letting his fingers travel along one string as Mehldau stayed quiet as possible while still playing. All the while, Ballard’s brushes kept shush-shushing. Mehldau picked it back up, leaning in with his right elbow out at ninety degrees as if to pull back an oar, unrolling a run of fluid chording, and finding the top end of the keyboard at last. As his arms crossed mid-keyboard, I saw his left hand for the first time that night and, like a conductor bringing his arms together and then flinging them out, he pulled his hands apart to bookend the keyboard, then anchored his left hand in the center and expanded the scope of play with his right. Grenadier picked up the strings and drew the fifteen-minute song to a close.

The concert wrapped up with “something a few years old,” namely, the title track of Highway Rider; the drums laid down an idea, stopped for a quick piano solo, then the bass slid in, and Ballard stacked a final layer on top. The sound was more than the sum of its parts, with expansive swoops on piano, sudden stops and starts on the drums, and Grenadier slapping the neck of the bass. Ballard began some serious simmering and, with Mehldau’s boot tapping at eye level four meters away and the blue and gold Fresnels making stripes on the Steinway, I felt warmed up and ready for a second leg. But the ride was over. The drums unspooled into a large, lazy circle, and suddenly the song, and the set, was finished.

A quick, almost cursory, encore, with Ballard’s stripped-down drums, soft mallets fizzing the cymbal, Grenadier scribbling on the bass strings with a fingernail, and some quiet, deconstructed playing from Meldau did little to mollify me for an unforthcoming second set.

The concert was workmanlike—Dallas is, perhaps, not the hot center of the Mehldau Trio’s fan base, although a sizable contingent of the University of North Texas jazz crowd made it down for the show—but the work was good, and our chances of seeing them in town again seem slim. For the moment, Mehldau fans will have to be content with listening to his last solo album (After Bach, a different animal altogether), buying the Trio’s next one, or wishing for a European vacation.
Paul on Thursday, May 10, 2018
Share