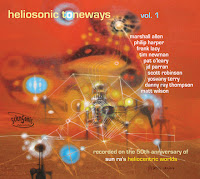 By Troy Dostert
Sun Ra’s Heliocentric Worlds album, released on the legendary ESP label in 1965, was an important record. Using an 11-piece ensemble, it was one of the first attempts to envision possibilities for large-scale collective improvisation, and it thus paved the way for later efforts like the Globe Unity Orchestra’s recordings of 1967 or the Jazz Composers’ Orchestra’s debut in 1968. Such projects are now commonplace in free jazz, so it’s easy to forget how path-breaking they seemed in the 1960s. Which is why Scott Robinson’s Heliosonic Tone-tette is doing a valuable service by releasing Heliosonic Toneways, Vol. 1, its 50th anniversary tribute to the first of the three Heliocentric Worlds records (Vol. 2 was released later in 1965; Vol. 3 wasn’t released by ESP until 2005).
The pedigree behind the making of this album is beyond reproach. Not only is Scott Robinson one of the foremost experts in today’s creative music scene when it comes to the sheer variety of his instrumental mastery—a trait which puts him in perfect position to approach the unique musical world of Sun Ra, who was renowned for his appropriation of a panoply of unusual and esoteric musical devices—but he also has joined forces with the ageless saxophonist Marshall Allen (now 93 years young) and Danny Ray Thompson, another multi-instrumentalist, both of whom have devoted many decades to the Sun Ra Arkestra during its earthly sojourn.

As Robinson stresses in the liner notes, this release honors the spirit of the original album rather than attempting a re-creation of it. This is not a repertory exercise. At over an hour in length, it’s considerably more extensive than the original (which clocked in at under 35 minutes). But even more importantly, this album is purely improvised, whereas the original offered substantial sections that were composed; it was hardly a purely “free” recording, even while offering a startling departure from most large ensembles recorded during that era.

The original release got its power not from moments of collective fury or brash experiments in cacophony (although there are a few of those), but mostly from its deliberate, almost chamber-like exploration of texture and sonority. Its mood is mysterious and transfixing, but not generally a display of show-stopping muscle. In this sense, Robinson and his colleagues have indeed captured the spirit of the original, with music that has occasional bursts of raw energy but is more frequently intent to carry out restrained and patiently delivered musical statements—albeit with a heavy quantity of the mystery and otherworldly character of the ultimate space pioneer himself.

The music’s true imagination consists, therefore, like the original, in the distinctive moods it evokes and the unique sonority of the musicians’ instrumentation. Not only does Robinson play the actual bass marimba that Sun Ra played on his record (in addition to a host of other oddities, including a theremin, “power bore” bugle, and space magnets (!?)), but we also hear something called a waterphone (played by bassist Pat O’Leary), and even a dragon drum (played by drummer Matt Wilson). It all adds up to a remarkable assemblage of musical possibilities, and the group takes full advantage of them.

Keeping track of each instrument used becomes a bit fatiguing, so the best way to appreciate the music is to simply let it work its magic. Pieces like the opening segment, “Heliotone 1a,” are perfect in establishing the feel of the music, as the rich notes from the bass marimba begin to percolate and the rest of the band gradually joins in, creating a mélange of sounds that somehow cohere despite their being collectively improvised. Eventually rhythms develop, although they don’t become static, as the music has a constant sense of movement and restlessness. And the deep sonority of the music is always present, helped in large part to the low brass: Tim Newman’s bass trombone and Thompson’s baritone sax do a lot to supply the music’s resonance, and the strong rapport between O’Leary and Wilson deftly allows the episodic grooves to emerge spontaneously as the music unfolds. The ample use of electronics is another defining feature of the record, as floating strains of Allen’s Casio VL-tone or EVI make their appearance, as do Robinson’s Wurlitzer and theremin.

All in all, it’s a meaningful and well-conceived homage to the inimitable Sun Ra, one that’s soon to be followed up by the forthcoming Vol. 2 later in 2018.