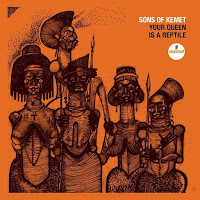 In his book Black Talk from 1979, Ben Sidran shows how black music has expressed, consciously or not, its African 'oral' heritage, reflecting the conditions of a minority culture in the midst of a white majority. He tries to explain the cultural basics of black music and how the music itself supports these basics and preserves them. Oral culture is both medium and impulse of black culture, transcending formal analysis in order to pass on a specific experience and authentic emotions. His central thesis is that black music is not only an extraordinary aspect within black culture, it doesn’t just reflect it, instead it is of crucial, indispensable importance - in fact it’s the foundation of black culture. According to Sidran, oral culture as a means of communication is based on immediacy. One of the advantages of this form of communication (in contrast to "literate culture") is to interact spontaneously since you’re forced to improvise and react very quickly. Sidran quotes Huey Newton, a prominent member of the Black Panther Party, who claimed that the black community was based on activity, their members didn’t get their knowledge from books which is why black protagonists had to be regarded as activists.

Your Queen Is A Reptile, Sons of Kemet’s third album, stands in this tradition. It’s the band’s first one since the 2016 Brexit vote, and it directly attacks British nationalism, racism, social inequality and the monarchy. British society is presented as one of contrasts, illustrated by you (the whites) and us (black immigrants) - and even if this oversimplifies the social situation, it’s a powerful dichotomy in order to provoke. The image used on this album is the one of the Queen. The liner notes state:


"Your Queen considers herself our better; by right of blood, by way of lineage, by grace of conquest, by the reason of tyranny, by the confidence of tradition.  (…) Your Queen is financed by our taxes, which in turn validate the injustice of class and race discrimination of Great Britain. (…) We the immigrants, we the children of immigrants, we the diaspora, we the descendants of the colonized, we claim the right to question your obsolete systems, your racist symbols, your monuments to genocide. (…) Your Queen is not our queen. She does not see us as human. And we see ourselves as humans. We judge our worth, not by Christmas speeches or golden jubilees, but by deeds. Our Queens walked among us. Our Queens led by action, by example, our Queens listened."

Here Shabaka Hutchings, the 34-year-old saxophonist, bandleader and activist, offers his version of a royal family, juxtaposing visionary black women like Yaa Asantewaa, the Ashanti queen mother who fought against British colonialism in the early 20th century, longtime radical feminist and author Angela Davis, and his own great-grandmother, Ada Eastman, to the British Queen*.

Sons of Kemet’s music is very aware of black history. But for Shabaka Hutchings memory isn’t enough, Sons of Kemet’s music is "about finding ways of reinterpreting how we’re thinking about it." For him, black cultural history isn’t something he has to preserve, it’s the starting point for a new way of criticizing politics and society - in this case in the UK. In "My Queen Is Ada Eastman", the album’s opener, guest vocalist Joshua Idehen rants:

All this is accompanied by a polyrhythmic groove. Apart from Hutchings the band consists of Theon Cross on tuba and Tom Skinner and Seb Rochford on drums (on three tracks Rochford is replaced by other drummers). The idea to integrate a tuba instead of a bass is reminiscent of the New Orleans brass bands, another tribute to black music history. It gives the songs a rhythmic fundament that bubbles rather than growls, creating a warmer, jouncing, and elastic sound.

Another outstanding track is "My Queen Is Mamie Phipps Clark," named for the social psychologist who researched the development of self-consciousness of black preschool children. Hutchings uses dub and Afrobeat elements in this song. Fronted by Congo Natty, who was one of the musicians that launched jungle in the early 1990s, the track quotes Ragga rhythms and the Studio One sound. A strong reverb is put under Natty’s vocals which echoes songs like "Ghost Town" by The Specials or "Freedom Sounds" by The Skatalites, supported by Hutchings’ Caribbean sax cries and Theon Cross’s grumbling, guttural tuba.

Every song on this album is pure fun, for example "My Queen is Yaa Asantewaa" with its dreamy jazz sax melody line which morphs into an pulsating improvisation reminding me of the John Lurie National Orchestra, or "My Queen is Harriet Tubman" with its joyful, mad sax excursions evoking Nigerian Jùjú music.

Last but not least, Your Queen Is A Reptile is Sons of Kemet’s first release on Impulse!, the label that was home to Charles Mingus, John Coltrane, and Pharoah Sanders (to name only the most famous ones) and which was re-launched a few years ago. This adds another dimension to Hutchings’ relationship with black music, being put in one line with some of the greatest names in jazz. Maybe this might get Sons of Kemet access to mainstream audiences, this album would deserve it. Move your ass and your mind will follow!
* Other black women/queens mentioned are Mamie Phipps Clark, Harriet Tubman, Julia Cooper, Nanny of the Maroons, Albertina Sisulu and Doreen Lawrence.
Your Queen Is A Reptile is available on double vinyl and on CD.

Listen to “Your Queen Is Ada Eastman“ here:

Nice review, thanks for taking the time to dig deeper into the politics of it.
It is musically very impressive, this band have been building to a statement like this - the intertwining of many musical styles appears seamless and obvious, creating a very British album but one with an undoubted international outlook.
It also feels a very timely album as the UK struggles once again with its relationship with our immigrant population and the repercussions of our, too often glossed over, colonial past and the misdeeds therein.
Powerful music like this needs to be heard. Once again that Impulse! logo represents music of depth and authority