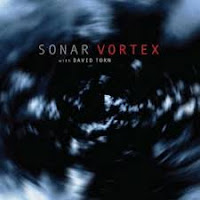 Sonar is a mathematically oriented, rhythmically-based quartet from Switzerland, and recently, they've became a temporary quintet with David Torn adding a third guitar and his unconventional looping and sound manipulations to their newest recording Vortex.

The core group is comprised of Stephan Thelen and Bernhard Wagner on guitars, Christian Kuntner on electric bass, and Manuel Pasquinelli on drums. Aside from playing with the band, Torn also produced the album, giving the group a big sound with deep bass tones and stratospheric guitar highs.

The opener 'Part 44' begins reminiscent of the gamelan inspired sound of King Crimson ala Discipline. 'Red Shift' kicks off with a heavy riff, and at a break, you can almost hear Adrian Belew begin to sing 'frame by frame/death by drowning." However, the group quickly switches modes to a lighter more ambient groove and slowly builds up to a majestic peak of sustain and inspiring dissonance.

The track 'Monolith' offers a respite from the sometimes too precise time signatures. Spacious and austere at the beginning, the track builds very slowly, the guitars lock into a pattern with the bass and drums but leave plenty of room for the crunchy guitar that enters later. The title track is one my favorites, again the sense interlocking rhythms are a bit lower in the mix and a melodic loop full of mysterious intervals overlays the minimal drum work. When Torn (I assume) enters, he's soaring above the groundwork like an IMAX camera mounted to a bald eagle.

So, while the group isn't new, Vortex is their 4th album, their sound is fresh and exciting. Dense but atmospheric, calculating but not quite math-jazz, give it a listen, it just may surprise you.