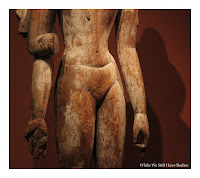 How one can create music of madness? Or music that will follow the process of a man who turns mad, in a far away, foreign culture and in a different era?


The New York-based experimental quartet While We still Have Bodies - trombonist Ben Gerstein, double bass player Sean Ali, sax player Michael Foster, and percussionist Flin van Hemmen, planned to record their debut album on the summer of 2017, but then was contacted by Chinese media-artist Cheng Ran. Ran asked the quartet to record music for his multi-video installation exhibition “Diary of a Madman” at the New Museum in New York. This exhibition borrowed its title from what is widely considered China’s first modern short story, written by Lu Xun in 1918. Just as Lu Xun’s story, the Ran’s exhibition comprised first-person narratives of a character at the margins of society who gradually turns mad.

Ran’s offer turned out to be an inspiring one. While We still Have Bodies has operated since its foundation in 2014 as a sonic lab that explores intuitive, sometimes unintelligible textures that challenged the musicians methods, routines, and perceptions. The quartet focused on experimenting with sounds that transcended the individual musical personalities, blending and contrasting sonic textures, long and immersive musical forms, and an integration of pre-recorded media (cassettes, radio, mp3 players, cellular phone) into acoustic textures.

The music for Ran’s exhibition was spatialized over twelve speakers that were spread throughout the gallery, providing an ambient soundtrack to the several separate but interconnected story-lines of Ran’s video-films. On the recording, each instrument has a left and right channel, thereby creating spaciousness and intensifying the overall feeling of losing your way and total confusion.

While We still Have Bodies prepared a single, extended improvisation, imbued with an enigmatic, ritualistic motives. The musicians act, all over the place, more often than play - in any conventional sense of playing, re-contextualizing their instruments and their timbral affinities, and their role as improvisers in the theme of the exhibition, as can be seen in the attached video. The arresting, yet very demanding outcome is a nuanced but totally spontaneous process of constructing and deconstruction of sounds. A non-judgemental process of integrating sounds into a bigger, deeper whole. All sounds - sparse, fractured, cryptic and more intelligible ones, noisy, acoustic, of low-fi electronics and of found objects.

And these sounds have an arcane quality and even almost hallucinogenic power. These sounds shatter inhibitions, open doors to new ways of listening, force you to relate to these almost tangible reality and invite you to embrace the unknown. The mysterious, vibrant trances shift organically into rattling, heavy resonating sounds, to tortured collages made of noisy tapes,to atmospheric soundscape and even raw and intense outbursts of muscular free jazz. While We still Have Bodies does not attempt to gravitate this sonic experience into a clear narrative, structure or rhythmic patterns, but this open, all-inclusive attitude does not interfere with the quartet collective and highly impressive senses of interplay and invention.